Senate President Thomas V. Mike Miller choked up before making the announcement in the Senate chamber, as some of his top aides from over the years watched from the gallery.
Listen now to WTOP News WTOP.com | Alexa | Google Home | WTOP App | 103.5 FM
(1/9) 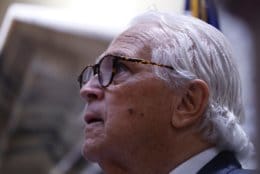 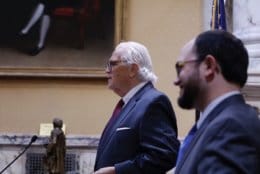 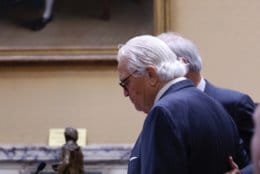 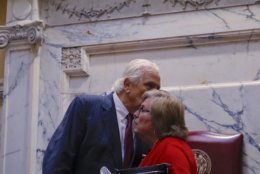 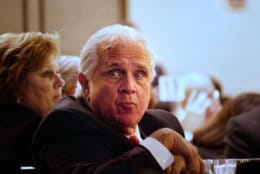 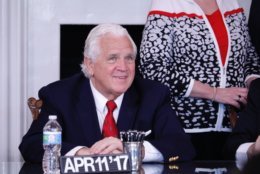 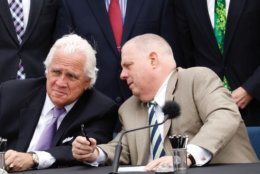 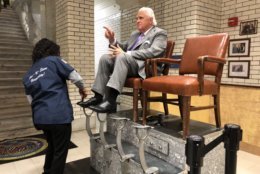 ANNAPOLIS, Md. (AP) — Maryland’s longtime Senate president said Thursday he plans to carry out his Senate responsibilities as he fights prostate cancer and undergoes chemotherapy during the state’s legislative session.

Senate President Thomas V. Mike Miller choked up before making the announcement in the Senate chamber, as some of his top aides from over the years watched from the gallery. The 76-year-old Democrat is entering his 33rd year as president of the Maryland Senate. He’s the longest-serving state Senate president ever in Maryland and in the nation.

“With your continued support and indulgence, I fully intend to fight this disease as so many have and to fully carry out my Senate responsibilities,” Miller said in a statement released as he addressed his colleagues on the second day of the state’s 90-day session.

Miller made clear he’d work as long as his health would allow.

In the statement, Miller said he been experiencing significant back pain after hip and knee replacement surgery “that never seemed to heal appropriately.” He was diagnosed in July with prostate cancer and prescribed medication and physical therapy.

“Despite these treatments, the pain did not subside and on December 27th, I awoke with a sharp pain in my leg,” Miller said. “After another series of tests at Johns Hopkins, the oncologist informed me and my family that the prostate cancer could no longer be managed through pharmaceuticals alone and that additional treatment would be necessary.”

Miller opened the Thursday morning Senate session with a voice that shook with emotion from time to time, even as he worked to begin the mechanics of the lawmaking routine. His voice quavered as he said, “We’d like everyone to record their presence in the chamber.”

As he introduced the Catholic priest who offered a prayer before the start of the session, Miller’s voice shook with emotion.“As you can see I’m not off to a good start”, he said with a small chuckle.

Miller didn’t get into specifics on the course of his treatment, or his state of mind other than to say of the diagnosis,  “It affects every decision you’re making — so you look in the morning and you see if your hair is still there. He laughed, then added, “It’s thinning out!”

Senators walked up to hug their longtime leader after Thursday’s session adjourned.

“It’s just a sad day for us, but as I’ve said we have to keep it together for the Senate’s sake and that’s what our president wants us to do, and we will just move on forward and do the best job we can and we all have to work together to make that happen,” said Sen. Kathy Klausmeier, who as Senate President Pro Tem will lead the chamber if Miller is absent.

“It’s very scary when your leaders are more vulnerable than they have been in the past, but I think it’s a great opportunity for leadership to rally around him and support him,” Eckardt said.

Of Miller, Eckhardt said: “He truly looks out for all of us. He supports all of us, he has an open door policy. He’s always here on the floor”

Outpourings of support have come from both sides of the aisle.

“My heart goes out to President Miller on what I know must be one of the toughest days he’s faced. I know firsthand how hard it is to receive a diagnosis like this. But I also know firsthand that Mike Miller has earned his place in Maryland political history because he’s a fighter who always gives it everything he’s got, no matter how tough things get. Mike’s tenacity, bravery, and perseverance will ensure that he wins this battle, and he has my full support.

“Yumi and I send our heartfelt prayers to Mike, his wife, Patti, and his family during this difficult time.”

“We wish the President a speedy recovery and will keep him and his family in our continued prayers. As we have seen so many times, cancer does not discriminate. We are confident that President Miller will face this new challenge with the same vigorous fighting spirit he has shown throughout his long legislative career.”

House Speaker Michael Busch, 72, had bypass surgery last year and a liver transplant the year before. Gov. Larry Hogan, 62, was diagnosed with B-cell non-Hodgkin lymphoma in 2015. The governor announced he was in remission in November 2016.

(WTOP’s Kate Ryan contributed to this report from Annapolis.)