Maryland's Helicopter Aquatic Rescue Team, or HART, has been activated to help people stranded by floodwaters from Florence. Other rescue teams from local jurisdictions are also in the Carolinas to respond to those in need.
Listen now to WTOP News WTOP.com | Alexa | Google Home | WTOP App | 103.5 FM

GAITHERSBURG, Md. — They train several times a year and prepare to be activated at a moments notice, and for one highly trained rescue team in Maryland, that time has come. The state’s Helicopter Aquatic Rescue Team, or HART, has been activated to help people stranded by floodwaters from Florence.

“These people are in distress in North Carolina,” said Col. Charles Kohler with the Maryland National Guard.

The team consists of 11 members of the guard and four team members from rescue teams in Montgomery, Harford, Baltimore and Howard counties. Kohler said they were all headed to Raleigh, North Carolina, on Sunday, where two National Guard helicopters will be used for rescues, according to Kohler.

“They have the ability to do swift water rescue and actually hoisting capability,” he said.

From swift water members on the ground, and the crew members in the helicopters, the team will search for residents stranded or in need of help. Once a person is located, they’ll be evaluated and brought up to the helicopter using either a harness or a basket.

“It’s a choreographed effort between the helicopter and the person on the ground coordinating the rescue,” Kohler said.

Kohler said one of the biggest struggles for the team will be finding people in need of rescue, because with power lines down and cellphone coverage spotty, not everyone will be able to call for help. So, they will fly over impacted neighborhoods looking for people trying to get their attention.

Kohler also said some rescue locations are even coming in on social media, as people use momentary times with cellphone service to ask for help on their Facebook and Twitter accounts.

This specialized team, according to Kohler, is a result of lessons learned during Hurricane Katrina in 2005. After the storm, many National Guard units responded to Louisiana, but they were not prepared for what they encountered.

“We have our helicopters and we have our pilots, but we don’t have the experience of actually pulling people out of water or off roofs,” Kohler said.

Now teams like this exist around the nation with, ironically, the idea of a helicopter aquatic rescue team coming out of North Carolina, according to Kohler.

A third helicopter will carry supplies for the Maryland’s team and they are prepared to put in some long hours with the goal of saving lives.

“We’re gonna do all we can to ease their suffering,” Kohler said.

Other local jurisdictions are also sending members of rescue teams to areas affected by Florence.

The Federal Emergency Management Agency activated VA-TF1, from Fairfax County, on Saturday, and the team is sending a 16-person water rescue team to help with the storm response in North Carolina.

Fairfax Fire and Rescue Chief John S. Butler was there to see the team off. The new chief started last September, taking over from the Richard Bowers who retired in April.

Members of @VATF1 packing up and getting ready to deploy. @ChiefJohnButler is here to support and see the team off. #fcfrd #hurricaneflorence pic.twitter.com/EWMt9MvQo1

On Wednesday, the 80-person strong Maryland Task Force One headed to South Carolina, ahead of Florence. The team had been on standby until it became clear that the brunt of Florence wasn’t going to smash the D.C. area. After South Carolina, they will go where FEMA sends them.

A spokesman for Montgomery County Fire and Rescue service said Sunday that Maryland Task Force One will likely head to western North Carolina next. 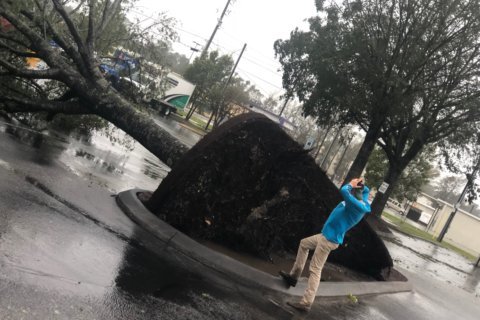 These are the staggering numbers behind Florence’s wrath