A school safety expert who has studied school shootings for several years advised Maryland teachers and school resource officers to throw out the common "profile" of who they think could end up bringing a gun to school.
Listen now to WTOP News WTOP.com | Alexa | Google Home | WTOP App | 103.5 FM

WASHINGTON — A school safety expert who has studied school shootings for years advised Maryland teachers and school resource officers to throw out the common “profile” of who they think could end up bringing a gun to school.

School shooters “look like a lot of different things,” said Bill Modzeleski during a presentation Thursday on school safety held at the National Guard armory in Annapolis.

While the stereotype of the social-outcast shooter exists, Modzeleski said they don’t make up the majority of school shooters. “The kids who were socially excluded were relatively few,” and often they came from what appeared to be stable families. Many of them “were actually doing pretty well in school,” he added.

“The events really bring it to everybody’s forefront that it can happen anywhere,” said State Superintendent Karen Salmon, who added that schools now have more safety resources available than ever before.

Modzeleski is a consultant and a former associate assistant deputy secretary of the U.S. Department of Education’s Office of Safe and Drug Free Schools.

Gov. Larry Hogan, who was at the summit, honored St. Mary’s County Deputy Blaine Gaskill, who is credited with responding to the March 21 shooting at Great Mills High School in which a 17-year-old student fatally shot his 16-year-old ex-girlfriend. Another student was wounded in the shooting.

Gaskill “truly is a hero,” said Hogan, who presented the school resource officer with a signed proclamation. “He really did his job and Lord knows what would have happened if he wasn’t there to help end the situation quickly.”

The student shooter turned the gun on himself after Gaskill approached him in the hallway.

Gaskill was also honored by the National Association of School Resource Officers, who have named him this year’s National Award of Valor recipient.

“I’m not a big fan of the pictures and poster child” stuff, Gaskill said. “I didn’t expect it. I know everybody says ‘hero, hero,’ but I wouldn’t call myself a hero. Everybody at the school, teachers and staff, and all of them, they’re all the heroes in my book.” 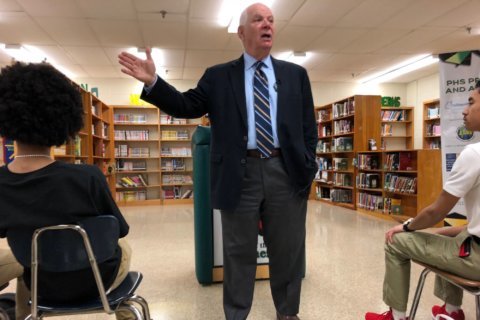