Maryland's secretary for transportation said that a traffic graphic that resembled the shape of swastika has been removed from the department's website and that its use was an oversight.
Listen now to WTOP News WTOP.com | Alexa | Google Home | WTOP App | 103.5 FM

LINTHICUM, Md. – A traffic graphic that resembled the shape of a swastika has been removed from the Maryland Department of Transportation’s website and its use was as an oversight, a state official said.

Secretary of Transportation Pete Rahn said the graphic was a piece of clip art taken off a website. “Our team member did not recognize its resemblance to an offensive symbol,” he said Friday.

For many younger people, images that resemble a swastika might not have the same resonance as it might for older adults, Rahn said.

“We took it down once it was pointed out to us, and I have apologized to anyone who was offended by it,” said Rahn.

Rahn told reporters on Friday that when he saw it, he spotted the problem right away. “It looked exactly like what people said it looked like.” Rahn said.

Rahn said the first indication that the website graphic could be considered offensive came from a tweet.

A Baltimore Sun reporter included the illustration of a traffic intersection and asked “Is it me or does MDOT’s congestion graphic look out of place for a state that just pledged its support to Israel?”

Is it just me, or does MDOT’s congestion graphic look out of place for a state that just pledged its support to Israel? pic.twitter.com/mADt2CgIOH 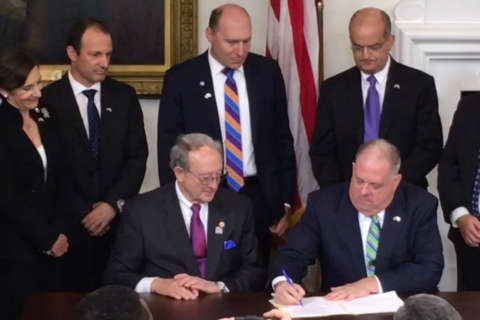