Hogan signed an executive order Monday that will require contractors that want to do business with state agencies to "certify" that they will not boycott Israel for the duration of their contract with the state.
Listen now to WTOP News WTOP.com | Alexa | Google Home | WTOP App | 103.5 FM

ANNAPOLIS — Maryland Gov. Larry Hogan has signed an executive order that will require contractors that want to do business with state agencies to “certify” that they will not boycott Israel for the duration of their contract with the state.

In a signing ceremony at the Maryland State House, Hogan said, “In order to continue Maryland’s fight against the discriminatory BDS movement, our administration is taking immediate action effective today.” He was referring to the Boycott, Divestment and Sanctions movement that has targeted Israel over its policies.

Hogan was asked whether supporters of boycotts could be critical of Israel’s policies without being discriminatory. He answered by saying the BDS movement is “clearly discriminatory.” He continued, “They’re asking people to discriminate against Israel — it’s clear. There’s no argument to the contrary that makes any sense.”

Hogan said Maryland had a “long and proud” relationship with Israel. Asked why he was signing the executive order now, Hogan said “There’s nothing special about the timing,” but added he’s asking lawmakers to follow up with legislation of their own during the upcoming session.

At the signing ceremony Monday morning, Sen. Bobby Zirkin called the executive order “a fantastic step,” but said it doesn’t relieve lawmakers from acting. A bill targeting the BDS movement failed in the last legislative session, but Zirkin said there could be a new attempt to pass legislation barring the state from investing Maryland pension money in businesses that support BDS during the upcoming session. 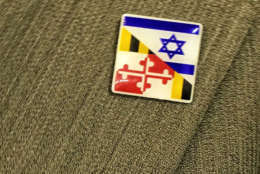 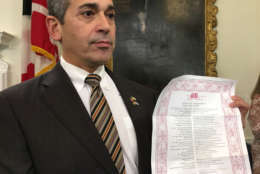 The American Civil Liberties Union has opposed similar laws in other states, and in a letter to U.S. senators in August, wrote in opposition of the Israel Anti-Boycott act, saying “This bill would impose civil and criminal on individuals solely because of their political beliefs about Israel and its policies.”

Del. Ben Kramer, who attended the signing ceremony Monday, called the BDS movement “nothing new—it’s straight out of the anti-Semite’s playbook dating back to the Middle Ages.” Kramer held up a copy of a declaration of cooperation between Israel and Maryland dating from 1988 and said Hogan’s executive order validated the relationship started then under Gov. William Donald Schaefer.