Mikulski passes torch with whimsy and, of course, breakfast

The longest-serving woman in the history of Congress stuck to tradition on Wednesday enjoying a post-election breakfast at a Fell's Point eatery near her office where she passed the torch, literally, to her successor, Chris Van Hollen.
Listen now to WTOP News WTOP.com | Alexa | Google Home | WTOP App | 103.5 FM
(1/3) 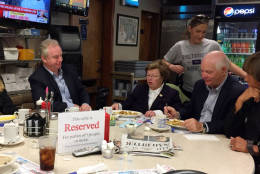 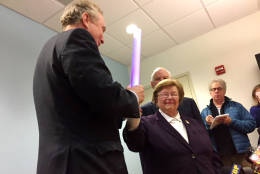 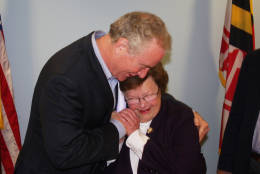 BALTIMORE – The longest-serving woman in the history of Congress has passed the torch – literally – to her successor.

It came after Mikulski, Van Hollen, and Sen. Ben Cardin ate breakfast at Jimmy’s Restaurant in Fell’s Point, something Mikulski has done after every victory.

Mikulski said it is crucial for leaders now to come together and show respect for one another.

Asked if she respects Donald Trump, Mikulski responded: “I respect the process that chose him. He’s the president-elect, and I think we need to start with civility, stick with the constitution, and I think we’ll be OK.”

Mikulski also said she was impressed by the voter turnout and the orderly election process Tuesday.

With her retirement, Maryland will have two male senators. And with Rep. Donna Edward’s departure from the House, no women will represent the state in Congress.

“Abigail Adams said to John, when they were writing the Constitution, ‘don’t forget the ladies’. Guys, don’t forget,” Mikulski quipped.

She remains focused on work to be done in the lame-duck session on issues that include jobs, the economy and “putting the money in the federal checkbook that is so important to Maryland.”

Mikulski announced last year that she would rather spend her final months in office “raising hell” than raising money for a sixth term in the Senate. 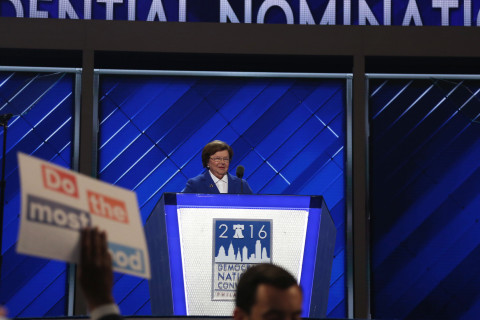