TAKOMA PARK, Md. — Inspections are underway at 27 state-run Maryland bridges after a piece of concrete from a Capital Beltway bridge fell onto a car driving below it on Suitland Road.

“Motorists should not have to think twice about driving across or under one of our bridges,” Rahn said in a statement.

All the bridges being inspected are on a list of ones that need to be rebuilt. They also are similar to the Prince George’s County bridge. They were built before 1975 and have roads that go beneath them.

Teams of inspectors will look closely at the bridges and decide whether repairs need to be made.

Repairs may include chipping away any loose concrete, adding epoxy and adding planking to catch any cement that could fall in the future.

Valerie Burnette Edgar, a spokeswoman for the Maryland State Highway Administration, said it’s rare for a piece of a bridge to fall off, but the agency is taking it very seriously.

“We want to make sure, if it is all possible, to prevent this, we do,” Edgar said.

Many of the bridges on the list are inspected at least every two years, Edgar said. The Prince George’s County bridge, where cement fell off, will now be inspected every six months.

Of the 27 bridges, five of them are under construction, and plans to replace the others are still being developed. 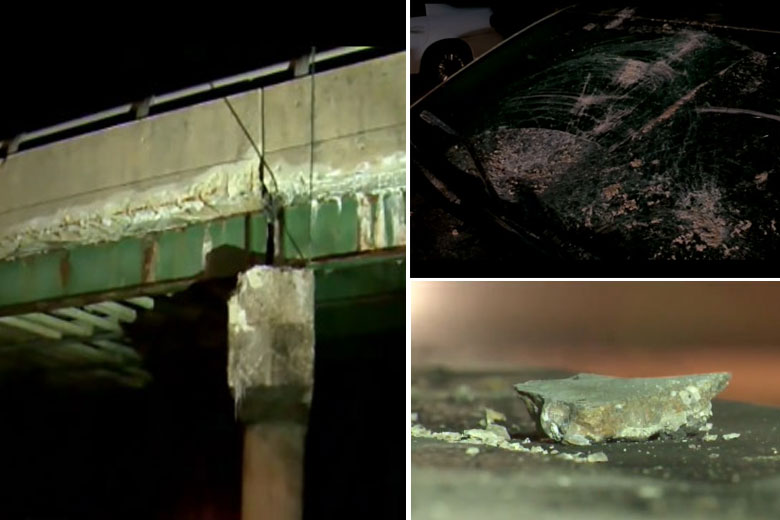 Car hit by falling chunk of concrete from Md. bridge