T.J. Barbieri was 16 when he signed up for the Rockville Volunteer Fire Department, and 23 when he was killed in Iraq. It's been 13 years, but Eric Bernard still runs to remember him.
Listen now to WTOP News WTOP.com | Alexa | Google Home | WTOP App | 103.5 FM

When T.J. Barbieri, of Gaithersburg, Maryland, was 16 years old, he walked into a firehouse in Rockville with his parents and said he wanted to volunteer. It wouldn’t be the last time Barbieri would end up putting others ahead of himself.

“He was actually very shy,” said Eric Bernard, the president of the Rockville Volunteer Fire Department. “You could see in his eyes; you could feel in the way he spoke to you, and always looked at you, he was a genuine person. He was one of those really good guys.”

“I call him a double hero,” he added. “Because he served in the military and he served as a volunteer firefighter.”

He was younger than everyone else in the firehouse, but the fact that he liked to cook helped him fit in; as Bernard said, firefighters like to eat.

After high school, Barbieri joined the Army, did a tour in Afghanistan, came home, and then deployed to Iraq.

He was there less than a month when his unit was ambushed in a suburb of Baghdad.

That kind of heroism didn’t surprise Bernard. He eventually met some of the people Barbieri served with, and said, “They had the same opinion of T.J. that we did — wonderful young man.”

The Barbieri family started a Marine Corps Marathon tradition by getting Bernard and other firefighters, as well as those who served with T.J., to run in the MCM 10K. A couple of years later, Bernard and some others decided to go all out and run the marathon.

It used to be that everyone who ran would gradually make their way to the Barbieris to grieve and honor T.J. afterward. That doesn’t happen now, but Bernard keeps running in T.J.’s honor anyway.
This will be his 10th marathon in a row.

“It’s not for my personal enjoyment,” said Bernard. “It’s all about remembering T.J. Barbieri, an American hero who grew up in Gaithersburg, Maryland, served the United States Army, and served the Rockville Volunteer Fire Department. He’s a hero squared.”

That’s what keeps Bernard going. At 53, he said everyone at the firehouse jokes about how, in the days after the marathon, he’s not going to be moving around very quickly.

When Bernard runs the race, he wears a jacket with his own name and “Doc,” his Navy nickname — and T.J.’s name. He said he hears the cheering from people in the crowd, and uses the encouragement when people bring up T.J.’s name during the race to get through it.

The race comes to a close at the Iwo Jima Memorial, but to get there you have to run past Arlington National Cemetery, where Barbieri is buried. Bernard goes every year on Memorial Day with a wreath, a pin, and a challenge coin to honor his friend who passed away too soon.

“The Marines, at the end, when they put that medal around your neck, I just say to myself and to the Marine ‘I run this for specialist T.J. Barbieri, United States Army,’” said Bernard. “And they give me a tall salute and it puts me in tears. Every year.” 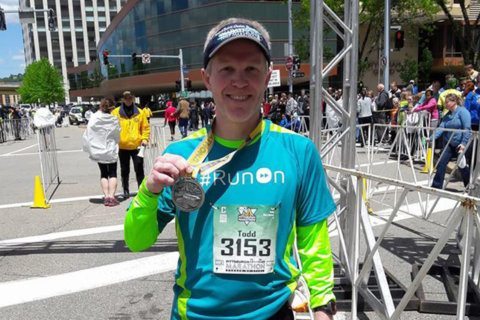 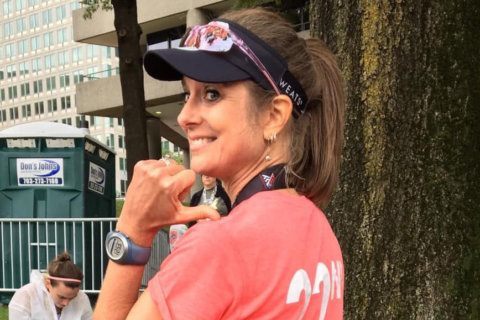 23 years in a row: Silver Spring woman runs MCM because it’s her destiny 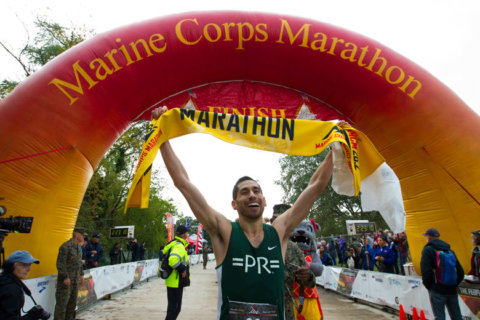