Holidays: 'Enchant' shines with millions of lights in Nats Park | Where to see holiday lights | Send in photos of decorations | How to give greener this season
Home » Loudoun County, VA News » Short-term safety improvements for…

Short-term safety improvements for US 15 ranked for Loudoun Co. supervisors

Loudoun County’s Board of Supervisors is set to consider 10 prioritized short-term safety improvements that can be implemented long before U.S. Route 15 north of Leesburg, Virginia, is widened from two lanes to four.

In July, the board amended its 2019 Countywide Transportation Plan to widen the picturesque, but often congested and dangerous commuter from two to four lanes, from near Lucketts to Leesburg in Northern Virginia. A bypass around the village of Lucketts will be built west of Route 15, with a final alignment to be determined as part of the design process.

But changes won’t help commuters today, tomorrow or anytime soon: If all proceeds as planned, the project is slated for completion in 2040. Tuesday, the board of supervisors will consider a prioritized list of safety and operational improvements for Route 15 that can be reasonably completed within seven years. 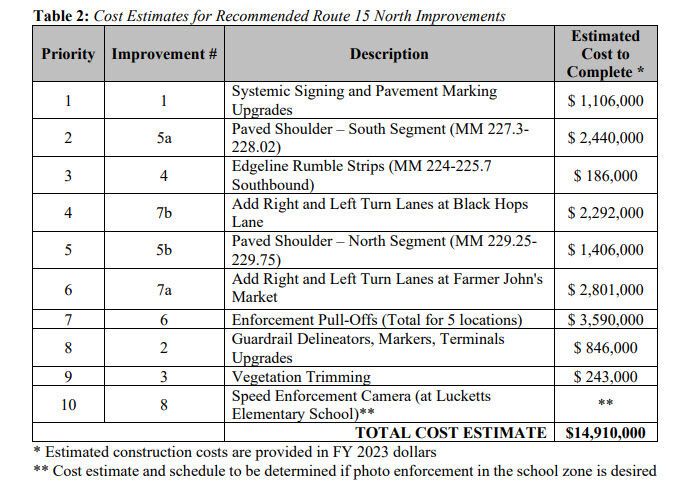 To prioritize the recommendations, the staff used the Federal Highway Administration’s Highway Safety Improvement Program process, to evaluate each recommendation using a cost-benefit ratio. The Virginia Department of Transportation (VDOT) uses the same data-driven approach, according to the agenda item.

At the top of the list is signage and pavement marking upgrades. Other improvements include rumble strips, paved shoulders and new turn lanes at spots where traffic often backs up on Route 15.

According to the staff report, the signage and pavement marking upgrades are typically considered routine maintenance and operations activities that should be performed by VDOT: “However, VDOT’s maintenance schedule and budget are uncertain; therefore, staff recommends that the County provide funding to VDOT to expedite them.”

Implementing all 10 safety improvements on the list would cost approximately $14,910,000, which would need to be programmed into a future capital budget, according to the staff report.