The superintendent of Loudoun County Public Schools sent a brief, confidential email to school board members on May 28 — the same day a female student at Stone Bridge High School said she was sexually assaulted in a bathroom.

In an email provided to WTOP by the school system, Superintendent Scott Ziegler alerted the board that the Loudoun County Sheriff’s Office was investigating the incident, but provided few details.

The school board is often notified of major incidents at schools, but rarely given the specifics or told about who is involved because the board may be involved in student disciplinary actions.

“The purpose of this email is to provide you with information regarding an incident that occurred at Stone Bridge HS. This afternoon a female student alleged that a male student sexually assaulted her in the restroom. The LCSO is investigating the matter,” Ziegler wrote. 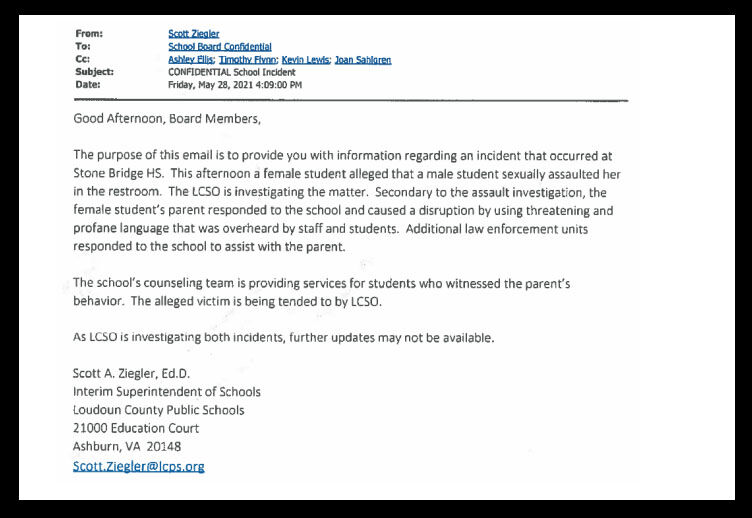 Last week, Ziegler apologized for the school system’s reaction to recent sexual assaults by students and outlined steps he said would improve the system going forward.

The May 28 assault was not made public until the victim’s father told the Daily Wire that the same 15-year-old charged in his daughter’s attack was later charged with groping a different girl, at Broad Run High School, on Oct. 6.

WTOP is not publishing the May 28 victim’s father’s name to avoid indirectly identifying a sexual assault victim, who is also a juvenile.

Loudoun County Commonwealth’s Attorney Buta Biberaj told WTOP that the same 15-year-old has been charged in both crimes. Biberaj said the boy was on pretrial electronic monitoring for the May 28 sexual assault when he was charged with sexual battery and abduction for the October incident.

The 15-year-old, from Ashburn, who is not being identified because of his age, is being held at the Loudoun County Juvenile Detention Center.

In his Oct. 15 statement, Ziegler began with an apology.

“First, let me say to the families and students involved, my heart aches for you,” Ziegler said. “And I am sorry that we failed to provide the safe, welcoming and affirming environment that we aspire to provide. We acknowledge and share your pain and we will continue to offer you support to help your families through this trauma.”

Since then, the May 28 victim’s family has said it intends to file a civil lawsuit against the school system.

Bill Stanley, the attorney representing the family, said in a statement that Ziegler’s comments confirmed what the family already believed — that the county’s school board and administration “failed to provide the safe environment” for their child.

“As evidenced by subsequent events and revelations, Loudoun Public Schools have been failing the parents who entrusted them to provide a safe environment for their children every day,” Stanley said. “That trust has (been) irrevocably broken by Loudoun County Public Schools’ actions and inactions.”

The assaults and the school system’s weak response have become a highly charged political matter.

“They had a duty of care and they failed,” Youngkin said. “They endangered our students.”

Youngkin accused the county of a “cover-up,” noting that the school system was being investigated by the Virginia Department of Education for omitting, in a public database, reports of sexual assaults at schools.

In previous remarks, Ziegler responded to that investigation and blamed a “lack of oversight that existed prior to my tenure.”

In a Thursday statement, LCPS said it was releasing Ziegler’s email after it “received a number of questions from community members regarding if, and when, the School Board was made aware of the alleged sexual assault that occurred May 28 at Stone Bridge High School.”

“The School Board was not provided specific details or the names of those involved, and were advised by Dr. Ziegler that they would not receive updates regarding this matter, as it was being investigated by the Loudoun County Sheriff’s Office,” according to the statement.

In last week’s statement, Ziegler said that although the school system “complied with our obligations” regarding sexual assault of students under federal Title IX, he called that process “insufficient” and suggested several reforms.

Ziegler said he would propose changes to the Memorandum of Understanding between the school system and the Loudoun County Sheriff’s Department “to ensure school discipline and criminal investigations can happen simultaneously … this includes notification from the sheriff’s office to the superintendent and principal when students are charged with serious offenses.”

In last week’s statement, Ziegler also explained why he answered “no” to a school board member’s question about whether he was aware of sexual assaults in school bathrooms. Ziegler said he wrongly interpreted the question as incidents involving transgender and gender-fluid students, since questions moment earlier had been about the county’s transgender policy.

Ziegler expressed regret “that my comments were misleading and I apologize for the distress that error caused families.”