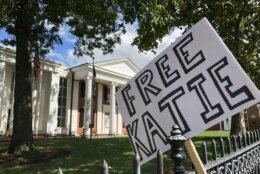 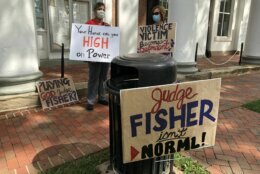 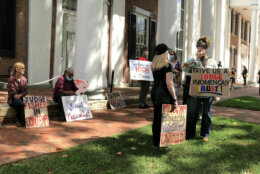 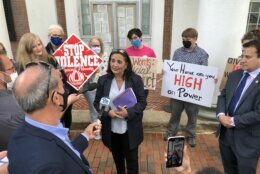 It’s unclear whether the case in a Loudoun County, Virginia, mistrial will move forward. The alleged victim was removed from the stand by a judge who thought she was high. Then she was jailed for contempt.

Advocates for domestic violence victims are outraged and protested Thursday outside the Loudoun County Circuit Court.

Katie Orndoff was released on bond two days after the Sept. 7 assault and battery trial, where her former partner is accused of punching her in the face twice with a closed fist.

“If she smoked marijuana, didn’t smoke marijuana — that does not change the facts that she came before this court on the allegation that somebody physically abused her,” Loudoun County Commonwealth’s Attorney Buta Biberaj said.

The case moving forward would involve scheduling the matter for a new trial, then the court assessing whether the case could go forward based on double jeopardy. And it would depend on Orndoff, the sole witness, deciding to testify.

Biberaj said she’d like for the case to have a proper hearing.

“More importantly, on behalf of victims, we want the message to be sent to the victims that you are guaranteed that you will be treated with dignity and respect when you come to our courts,” she said.

“I’m very disappointed to see what happened in the courtroom,” said Juli Briskman who is a Loudoun County Supervisor. “The display of misogyny and patriarchy and sexism has no place on our bench.”

There’s concern that Orndoff’s situation might prevent other assault victims from coming forward. Orndoff admitted she had smoked marijuana before court to calm her nerves before facing her abuser.

“If you have the bravery and ability to come to court, and that you’re not going to be treated respectfully, what incentive is there for somebody to do this?” Biberaj asked rhetorically.

“Please understand a presiding judge is not ethically permitted to comment on a pending case. As judicial staff, we are bound by the same ethics as our judges,” Alejandra Rueda the chief of staff for Loudoun County Circuit Court said in a statement to WTOP.

The Associated Press reports that Fisher stated that while marijuana was legal in the commonwealth, it was illegal to testify while intoxicated no matter what substance is used.

Fisher also claimed a drug test revealed Ordnoff “had taken methamphetamines and marijuana.” Ordnoff’s attorney said there was no evidence to prove the use of methamphetamines.

Lisa Sales is a survivor of sexual assault who organized the protest, which included the National Organization for Women and NORML. She said that, as a “a victim of the system,” she is furious with the result.

“This is completely unacceptable,” Sales said. “I understand why women don’t report and sometimes I second guess — Why did I report, right? But it’s important to create a paper trail against some of the most vile creatures in our society.”

She’s has been working with the Virginia Sexual Domestic Violence Action Alliance and is on the Equal Rights Amendment Coalition Advisory Council.

“I’m working on the Equal Rights Amendment because we find there’s a real connection between our lack of equality in America and the violence we experience as women,” Sales said.

She also wants domestic violence victims to know: “You are not alone and there are people that will help you.”

“Please do not give up hope,” Biberaj said. “Please come forward if you are a victim of domestic violence, the system will work.”

If you or someone you know needs help the National Domestic Violence Hotline can be reached at 800.799. SAFE (7233) or online. 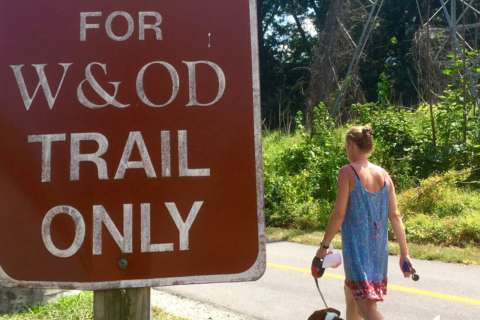