A group gathered at the Leesburg Courthouse Square in Loudoun County to call out against what they say are fraudulent election results.
Listen now to WTOP News WTOP.com | Alexa | Google Home | WTOP App | 103.5 FM
(1/4) 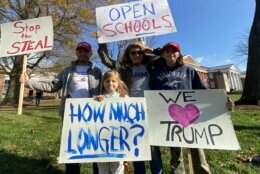 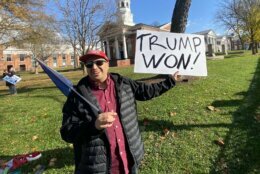 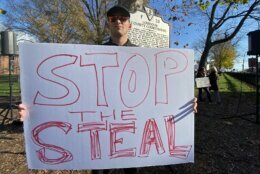 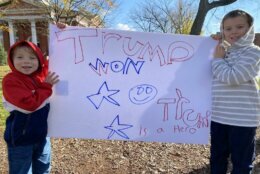 A group gathered at the Leesburg Courthouse Square in Loudoun County to call out against what they say are fraudulent election results.

“We have to stand up. It’s a battle of the public will at this point,” said Jon Tigges, Organizer of the LoCo Patriots “We the People Rally.”

He said that despite the court rulings against voting fraud claims that there was still widespread fraud in the election.

“I’ve filed three lawsuits this year against the governor, I’ve been to court, I’ve seen the politics of the court and anyone thinks that courts aren’t political hasn’t been there, hasn’t dealt with it,” Tigges said.

The group held “Trump won” and “voter fraud” and “stop the fear mongering” signs on Saturday morning as cars honked going by.

“The constitution gives us we the people the ability to actually restrain government and that’s what we’re heading on the path to do is get other people to stand up and start restraining the mess that’s taking place across our whole country,” Tigges said.

He said that they believe that the voter fraud is more widespread than just a few a ballots and they want action before the inauguration.

“It’s not just about a couple dead people voting like we’ve seen in past elections. It is rampant and massive and cannot be denied and will only be denied if people sit back and throw their hands up and just continue going on their weekend shopping trip.”

While the Trump campaign team has filed numerous lawsuits in several states that Joe Biden won, no evidence of substantial voter fraud has thus far been presented and many of the lawsuits have since been dismissed.

Editor’s Note: This story has been updated to reflect the fact that there has been no substantiated evidence of widespread voter fraud in the 2020 presidential election.

Loudoun Co. school board considers plan to return some students to schools