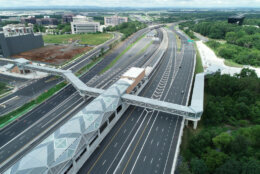 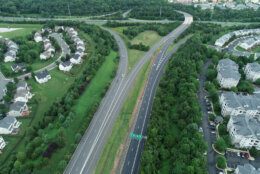 After $20 million and almost two years, a pair of rush hour relief projects on Northern Virginia’s Dulles Greenway are finished.

“The completed improvement project at the east end of the facility includes the addition of a lane that extends from the Greenway’s mainline plaza along the Dulles Toll Road to Centreville Road,” according to a news release from the Dulles Greenway, “which will ease morning peak congestion and improve the safety of the merge between Greenway customers and traffic entering the Dulles Toll Road from Route 28 and Dulles International Airport.”

The second project is part of an effort to relieve afternoon traffic in the Leesburg area.

“At the west end of the Greenway, the ramp to the Leesburg Bypass was reconfigured to accommodate increased Battlefield Parkway traffic (un-tolled) and help alleviate evening peak congestion.”

Approximately $3 million in additional work is scheduled over the next 18 months, to extend a lane along the westbound Leesburg Bypass between King Street and the Dulles Greenway, according to TRIP II, which owns and operates the 14-mile toll road.