Ahead of game one on Thursday, Little League World Series T-shirts and hats are on sale less than a mile from the fields where the Loudoun South Little League team practiced and played this season.
(1/3) 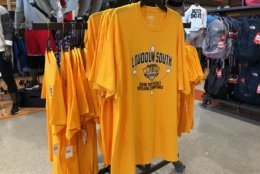 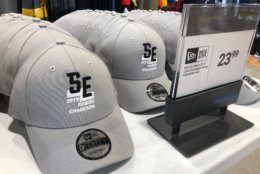 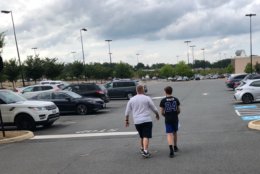 The Loudoun South baseball team is playing in the first game of the Little League World Series on Thursday, and while that may sound too good to be true, there’s sartorial proof.

Authentic Little League World Series T-shirts and hats are on sale at a Dick’s Sporting Goods outlet in Dulles Landing, less than a mile from the fields where the Loudoun South Little League team practiced and played this season. Now, they’re headed 200 miles north up Va. Route 15, to the championship in Williamsport, Pennsylvania.

Gold shirts reading “Loudoun South 2019 Southeast Region Champions,” with the Little League World Series logo hang on racks at the front of the store. Nearby, gray caps, with “SE 2019 Region Champion” lettering are neatly arranged on a table.

“We bought a couple T-shirts,” Willis Whalen said as he left the store with his son, Bryce. “We know what parents and the kids go through, and the expenses, so we just wanted to show support in any way we can — we’re actually going to take a road trip to support them.”

A Loudoun South Little League official says a portion of the sales of World Series gear will come back to the local league.

The team is scheduled to play its first game Thursday afternoon at 3 p.m. against the New England Region champion from Barrington, Rhode Island. Whalen and his son recognize that is a once-in-a-lifetime experience.

Teenager Bryce, who was a league all-star last year, can imagine the pressure and thrill for the players playing on ESPN.

“I think it would be exciting for the first few minutes, but then you have to focus on the game, and worry about being on TV later,” he said.

1 dead after crash near Leesburg