With two weeks until the first home game at a still-being-built stadium, Loudoun United is ready for the excitement, as well as traffic and parking.
Listen now to WTOP News WTOP.com | Alexa | Google Home | WTOP App | 103.5 FM
(1/7) 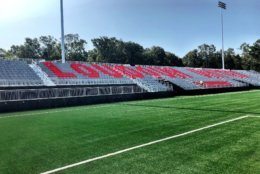 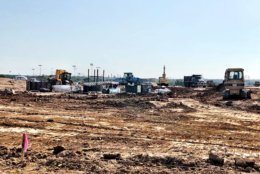 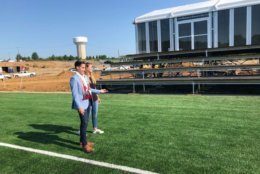 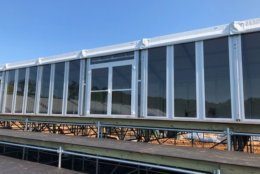 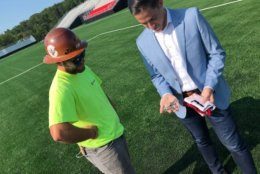 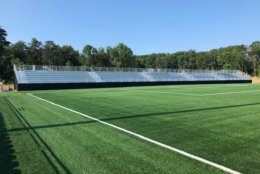 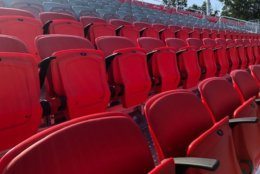 The soccer goals are expected to be delivered in the next 24 hours, as construction crews hustle to get the new Loudoun United soccer stadium in Virginia ready for the team’s first home game on Friday, Aug. 9.

The pristine soccer pitch is lined, and gray and red fold-down seats line the sidelines of the 5,000-seat stadium. Bleachers run along the south end of the field, while an enclosed suite area has been built in the past few days.

“We set our deadline of August 8th, the eve before the inaugural match,” said Adam Behnke, chief operating officer of Loudoun County’s first professional sports team, which is midway through its initial United Soccer League season.

The Loudoun United complex is being built within Philip A. Bolen Memorial Park, across Sycolin Road from Leesburg Executive Airport.

Thursday morning, Behnke stood in what will be the plaza surrounding the stadium, with heavy construction machinery clamoring nearby, hauling dirt. By the middle of next week, much of the area will be paved and ready for the initial match against the Charlotte Independence.

Two of three parking lots within a few hundred feet of the stadium will be ready by Aug. 9, with the capacity of holding approximately 500 cars. Parking at the adjacent county park-and-ride lot will be available as needed.

“It doesn’t appear as if parking will be an issue. It’s just a matter of how we move people in and out with our traffic management plan to make sure it’s not a headache for our fans,” Behnke said. “Game day can be made or broken by the first entry and access to the stadium.”

“It’s a $5 fee for parking, credit card or cash, and you can make that transaction on site, or in advance online,” Behnke said.

In late May, the county opened a stretch of Crosstrail Boulevard to add a second entry point to the complex off Sycolin Road.

“We’ll have these lights timed,” Behnke said. “We’ve worked very closely with the Loudoun County Sheriff’s Office — as well as our emergency medical office here and traffic management — to time the lights all the way into the town of Leesburg.”

County officials have maintained that a robust traffic management plan will reduce congestion around the stadium, which has been a concern in nearby neighborhoods.

The team is committed to minimizing disturbances to those living nearby and would be willing to deliver blueberry pies door to door, as a gesture of being a good neighbor, Behnke said.

In its initial season — with home-away-from-home games being played at Audi Field — the team has played some games in front of approximately 600 fans. Many of them live in Loudoun County and have been willing to travel to D.C., Behnke said.

“We are pacing well and are excited for a potential sellout on opening night and games following,” Behnke said. “We’ve heard a lot of buzz around as the stadium has come to life.”

During the Thursday morning visit, Behnke got a first look at an enclosed suite space located on the north end of the field that will be available for hosting guests, except on game nights.

The 3,000-square-foot space is climate-controlled for year-round use.

“Given how interactive and engaged our business community is, we thought this was a really cool way for business groups, or corporate events, parties or bar mitzvahs,” Behnke said. “There’s some really unique things you can do in a space like this.”

Each of the eight individual suites, which stretch the length of the goal line, will have 24 seats. “Folks can come watch the game 6 feet off the field or can stand up by the bar (and) grab a drink,” he said.

On either side of the field, approximately 2,000 “tip-up seats, which are really comfortable,” are gray. Behnke said they don’t get as dirty as white seats or as hot as black seats.

“The red seats signify our premium seats, which are close to the pitch midfield, which come with food and beverage included,” he said.

Some 800 bleacher seats line the south end of the field.

Behnke said he is grateful for the support that Loudoun County’s government, businesses and residents have shown the team.

“It take a lot of people to buy in to something like this to get it off the ground,” Behnke said. “We’re not going to stop until this place fills up and everybody’s having a great time.”