It is not about bringing D.C. United’s headquarters, training facility and a minor league soccer stadium to the county, but about what those facilities could wind up doing to traffic through a quiet neighborhood in Leesburg 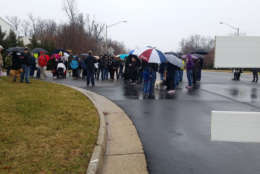 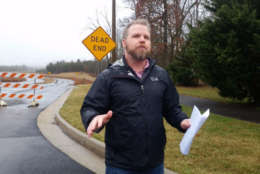 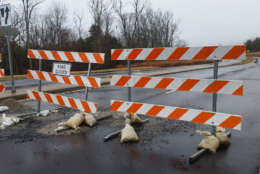 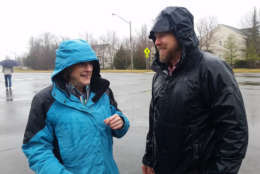 Neighbors of Kincaid Forest, a neighborhood in Leesburg that backs up to the land where D.C. United’s training facility and minor league stadium would go, came out in the pouring rain Saturday to rally against Kincaid Boulevard opening to stadium traffic.

For now, the road in Leesburg is closed off by barriers. But the other side of those barriers is Bolen Park, which is controlled by Loudoun County and the potential future home of the training complex.

Bryon Williams is organizing his neighbors to make sure the street remains closed.

Williams said the stadium site already struggles to deal with daily traffic without the addition of a 5,000-seat minor league soccer stadium. He worries that the Loudoun County board of supervisors are fast-tracking a deal without planning for road infrastructure.

The Loudoun County board of supervisors have agreed to a memorandum of understanding with D.C. United about the stadium site, though there are still zoning issues that need to be worked out before the final lease agreement can be completed.

Loudoun County Supervisor Kristen Umstattd, who represents the Kincaid Forest neighborhood, agreed that there is a lack of planning for road infrastructure to support the D.C. United project.

“There’s no real traffic management plan worked out at this time,” she said. “We don’t know the full extent of the additional congestion that stadium will generate.”

That is why she is concerned there will be pressure to open Kincaid Blvd in order to alleviate the congestion.

She said stadium traffic can access the new stadium on Sycolin Road, but pointed out that Sycolin Road is already known for backups during the rush hours and there is no money planned to improve the road.

Matt LeTourneau, a Loudoun County supervisor, disputed the idea there is no infrastructure planned in the deal. He said funding for the deal is already completed and that having a major franchise and youth academy in the area would benefit Loudoun County since it is one of the top counties for youth soccer in the country.

Umstattd said the county is putting up $15 million for the project, which D.C. United would pay back through rent while the county continues to own the land.

The complex would have four soccer fields, two of which the county would have access to through its Parks, Recreation and Community Services department. Umstattd said each field would cost the county $2 million.

If the deal is approved, construction would move quickly. Umstattd said she thinks it would only take nine months to complete because the stadium would have be ready by March 2019, so D.C. United’s minor league team could begin its season on time.

Leesburg Mayor Kelly Burk, along with a town council member, was also at the rally to support the residents.

The mayor agreed there could be pressure to open up Kincaid Boulevard but she said that would not happen before Crosstrail Boulevard, an alternate route, is completed.

Crosstrail Boulevard could take about two years to complete.

“That was a promise that was made and that’s the promise that’s going to be kept,” Burk said.

The Leesburg town council has authority over Kincaid Boulevard in the Kincaid Forest neighborhood.

“The county board of supervisors has made it clear that they will stop at nothing to ensure that this plan goes forward and that this stadium is built here by April of next year,” Williams said.