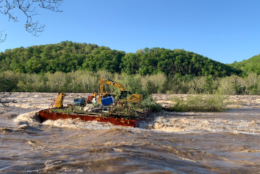 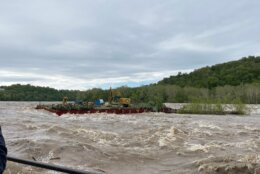 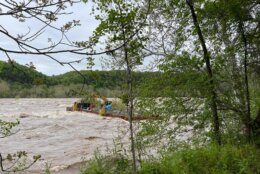 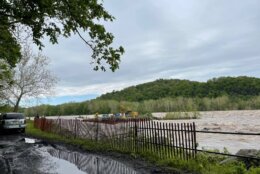 The Loudoun County Sheriff’s Office in Virginia said one of the barges got stuck just before Harpers Ferry, alleviating some concern that it could impact area bridges. The sheriff’s office said the bridges between Loudoun County and Maryland remain open.

Never a routine day in #Loudoun. LCSO has been coordinating w/ MD authorities after two barges became loose in the Potomac River & there was concern they could impact area bridges. At this time the barges are no longer moving down river & remain static in Harpers Ferry area. 1/2 pic.twitter.com/nIwMQWQw4k

Jessica Stover, who posted pictures and video of that barge to Facebook, said it got hung up in Bakerton, near Harpers Ferry, just before 5 p.m.

The other barge got caught below Dam 4, near the National Conservation Training Center in Shepherdstown, West Virginia, according to the National Park Service. NPS said one of the barges broke loose Saturday evening and the other became loose Sunday afternoon before they both started floating downriver.

Water levels are higher than usual in the Potomac after a weekend of persistent rain that soaked the D.C. region.

The park service said the pedestrian bridge at Harpers Ferry National Historical Park is cleared and locked on both sides, pending lower water levels. Visitors to the park can check its website for the status of the bridge.

Flood waters have pushed a barge free and now it's moving down the Potomac River carrying construction equipment towards Harpers Ferry. https://t.co/JuwgifuZXK

Stover said there was a big crowd along the river before Harpers Ferry trying to get a look at the barge.

“There were police on the other side of the river, kind of following it and keeping an eye on it, and I know that they were concerned about the bridges down river,” Stover told WTOP.