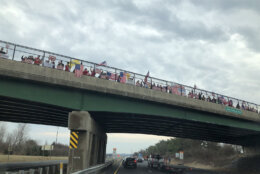 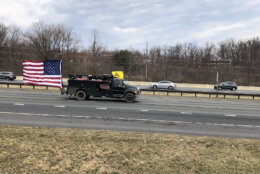 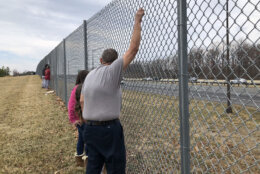 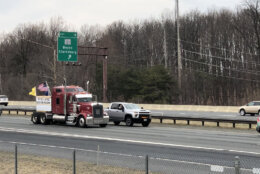 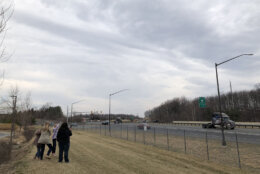 The People’s Convoy that came across the country to protest COVID-19 restrictions is wrapping up its second circuit of D.C.’s Beltway Sunday afternoon.

The convoy is currently heading west on the outer loop of Interstate 495 and approaching Interstate 270, where it will return to Hagerstown Speedway in Maryland.

The vehicles in the convoy have been staying in one lane and spacing out while driving a bit below the speed limit, WTOP’s Valerie Bonk reported. The convoy is about 30 to 35 minutes long.

It started in the Los Angeles area and made its way to Western Maryland on Friday. Saturday, participants in the convoy delayed plans to head to the beltway and instead held a rally. On Sunday, they hit the road in the morning. Their main goal was to protest COVID-19 mandates.

Bonk reported every truck in the convoy had an American flag and dozens of people were lining Interstate-270 in Frederick. Horns were honking but traffic was moving.

Amanda Yates from Pennsylvania watched the convoy pass by at the Clarksburg Outlets.

“It’s really cool all of the honking. Everyone’s really supportive, it’s really it’s like interesting. It’s a big piece of history,” she said.

Rob Vanhoozer is a truck driver himself and was standing on the side of I-270 South in Clarksburg on Sunday.

The “People’s Convoy” going by the Clarksburg Outlets on I-270 South. They seem to be staying to one lane and are spread out at this point. pic.twitter.com/7iQHveySGT

A Facebook page for the group told the group gathered at the speedway to meet up at 8 a.m. on Sunday at Mike Landis’ drop deck trailer but the post didn’t specify timing of a departure.

While vehicles began moving sometime around 9:30 a.m., the convoy took roughly two hours to crawl out of the speedway and onto the Beltway.

The convoy will keep up with the pattern of circling the convoy while increasing the number of loops every day this week until their demands are met, The Washington Post reports.

The convoy had said it would head toward D.C. on Saturday, but the group ended up staying in Hagerstown, Maryland overnight.

The convoy left from Hagerstown and the route is stated on its Facebook page:

The traffic center reporting the latest on traffic-related issues every 10 minutes; listeners can tune in to their live reports online.

On Sunday, volumes on the Beltway are at their lowest and can accept tens of thousands of vehicles before reaching capacity, WTOP Traffic’s Dave Dildine reports.

If the convoy keeps moving, Dildine said it likely won’t have an large impact on traffic as compared to mobile road work zones and crashes.

“From the farmer protests, to Mini Coopers, to Rolling Thunder, there is some precedent and for as much as we loath the ripples of traffic, most incidents are a flash in the pan when you step back and look at the bigger ocean of traffic,” Dildine said. “In as much, I worry we might be giving this a little too much attention but I suppose there is still some unknown.”

With that being said, Dildine said law enforcement’s concern may be lone wolves.

What the group wants

“And the fact that now it’s come out that even if you get the jab, you still can be asymptomatic and carry it and give it to somebody else. It just with all the new information is coming out all of it just doesn’t make any sense anymore,” a participant told WTOP’s Acacia James.

The convoy wants President Joe Biden to end the State of Emergency declared by Donald Trump at the onset of the COVID-19 pandemic, according to their website.

One father from Wisconsin said that COVID is a different version of the flu.

“If you look at hand sanitizer from 10 years ago, on the back of the bottle it will say that it helps to kill Coronavirus, not corona 19,” he told WTOP.

COVID-19 spreads more easily and in some cases can be more serious than the flu, according to the Center for Disease Control and Prevention.

But for some protestors, the motivation goes beyond COVID-19 related issues. One man told James he was driving in support of voter ID laws.

“I can’t function in the United States without showing my driver’s license to go anywhere. Why should it be any different if I’m voting?”

Bonk reported seeing police cars at almost every exit while driving near the convoy on I-495.

Maryland and Virginia State Police urged motorists to look for alternative routes and to plan for heavy traffic.

State police are monitoring the convoy’s potential impact to traffic with the help of local, state and federal partners, according to a news release from Virginia State Police.

Pls expect heavy traffic and delays on the Beltway today in both VA and MD (assume Inner Loop and Outer Loop) from mid-morning throughout the day. Local folks, pls use primary and secondary roads to avoid heavy traffic. Check https://t.co/1PROO2bITd before you go! @VSPPIO @MDSHA

The agency said they’ve talked with the protest’s leaders and when the convoy enters the region, drivers will see an increased presence of Virginia Troopers and the state’s Motor Carrier Safety teams to ease traffic.

“Virginia State Police respects the public’s First Amendment rights and has been in contact with various groups’ organizers to ensure their understanding of Virginia traffic laws,” the news release states. “These communications have also enabled us to share our expectations related to keeping traffic flowing safely and efficiently on Virginia highways, especially in the case of emergencies and for first responder vehicles.”

“While public safety remains a priority and we work to fulfill our statewide law enforcement responsibilities, the Maryland State Police respects the public’s First Amendment rights. Law enforcement personnel are working to maintain the flow of traffic and alleviate congestion as they make their way to the region and to the I-495 Capital Beltway.”

The department also warned drivers of a different kind of risk, potential misinformation and disinformation about the protest on social media.

The trucker convoy was estimated to have hundreds of vehicles ranging from semis to standard-sized cars.

This is a developing story. Stay with WTOP and Traffic and Weather on the 8’s for the latest on your commute. WTOP’s Ivy Lyons and Matt Small contributed to this report.