As the truck convoy/protest in and around D.C. wraps up its second workweek, commuters in the region dealt with more headaches for several hours Friday afternoon.
Listen now to WTOP News WTOP.com | Alexa | Google Home | WTOP App | 103.5 FM
(1/4) 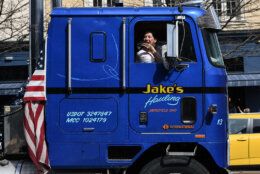 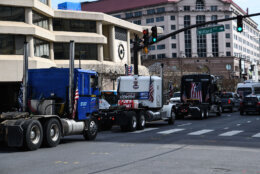 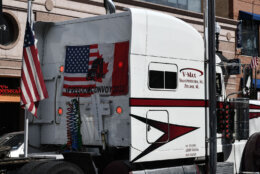 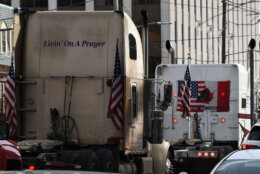 As the truck convoy/protest in and around D.C. wraps up its second workweek, commuters in the region dealt with more headaches for several hours Friday afternoon.

The eastbound ramp closures are over, Dave Dildine in the WTOP Traffic Center said at about 5:40 p.m., but the traffic remains heavy — given that it’s a mild Friday, that was already going to be the case — and smaller groups of truckers are roaming through the city itself.

There are “no major incidents,” Dildine said, adding that as groups of trucks headed back to their home base at the Hagerstown Speedway, “We’ve effectively just settled into more of a typical slow Friday traffic pattern.”

All eastbound exits on the Southeast/Southwest Freeway were closed at 1:45 p.m., including the ramp from the 11th Street Bridge to northbound D.C. 295. All eastbound freeway traffic was being sent southbound on I-295.

Dildine said at about 3:30 p.m. that traffic on inbound I-395 took an hour to get from the Pentagon to the 14th Street Bridge. “That’s about a mile,” he said.

A small group of trucks was headed down Wisconsin Avenue, in Bethesda, toward the city as well.

The convoy, which began in California, has created varying degrees of traffic problems in the area since almost-daily trips down I-270 to and around the Capital Beltway began March 6.