White's Ferry hasn't been running since December 2020 — a new study by Loudoun and Montgomery Counties looks at what a White's Ferry of the future might entail.
Listen now to WTOP News WTOP.com | Alexa | Google Home | WTOP App | 103.5 FM
(1/4) 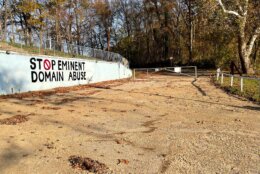 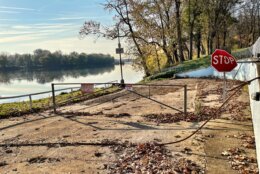 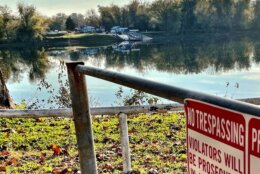 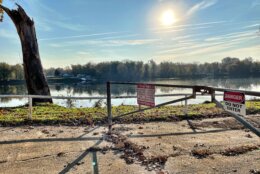 When White’s Ferry last transported vehicles and people across the Potomac River between Loudoun County, Virginia, and Montgomery County, Maryland, it carried between 600 and 800 vehicles daily — and a new study considers what it would take to increase usage.

In December 2020, the ferry’s owner stopped operations after a decision by a Loudoun County Circuit Court regarding the ferry’s right to use land on the Virginia side of the river. A new study investigates short and long-term possibilities for White’s Ferry, and will be presented to Loudoun County’s Board of Supervisors on Nov. 16.

Two alternatives were studied — restoring the most recent ferry service, or making long-term changes in infrastructure to increase capacity and usage of the last working ferry crossing the Potomac.

Restarting the ferry service would, at a minimum, “require inspecting the existing vessel to confirm its seaworthiness, ensuring adequate staffing and restringing the ferry cable,” which guides the diesel-powered ferry between landings near Poolesville, Maryland, and north of Leesburg, Virginia.

If the decision were made to enhance White’s Ferry: “Long-term changes in infrastructure, including improvements in staffing, roadways, fare collection, lighting, vessel upgrades and vessel capacity should be considered to improve the system’s capacity and resiliency.”

Since White’s Ferry has run on-demand — when the ferry operator decides there are enough vehicles to warrant a trip across the river — it would be difficult to have more than four round trips per hour.

Increasing capacity would likely include constructing and reconfiguring roads to allow more, and potentially larger, vehicles to get on and off the ferry.

On the Virginia side, a hairpin turn leading to the ferry landing limits the number and size of vehicles that can access it. The study includes sketches of suggested improvements that would replace the hairpin turn with a more direct road to the landing.

Another way to speed things up could involve electronic payments before boarding the ferry.

The ferry is actually two smaller ferries, bound together and operating as one. The study said one of the historic ferries will likely need to be replaced by 2028 — the other, soon after that. Among the alternatives: replacing the original ferries with similar-sized ones, or purchasing a larger, single ferry, either hybrid-powered or run on electricity.

The study finds usage of the ferry is at its highest on weekends — Saturdays in particular. The thought is, the weekend usage is related to what is on either side of the Potomac: A boat launch, White’s Ferry Store and Grill, National Park Service, parking on the Maryland side and nearby wineries on the Virginia side of the Potomac.

Making ferry usage more predictable for drivers could include electronic signage on Route 15 in Loudoun County, and larger roads in Montgomery County, advising of operating conditions.

Landings on either side of the Potomac are in the 100-year floodplain. Flooding in 2018 brought water levels 28 feet above normal levels, according to the study.

The study does not offer suggestions on how to move forward, but provides projected economic impacts, including travel time savings, travel cost savings, safety savings and the value of emissions avoided.

In a statement, Chuck Kuhn, owner of White’s Ferry, said they “appreciate the work and insights from the recent joint study by Montgomery and Loudoun Counties.”

“It underscores White’s Ferry importance to the region and also revealed the difficulties in maintaining and making the ferry a private successful enterprise as the previous owners recognized. We remain committed to making White’s Ferry operational and affordable for customers. The ferry is a scenic crossing but also an important connection that helps employees get to work and contributes to the economy in many other ways. The impasse has cost people time and money and added traffic and environmental woes to our community. We look to the counties to help us move forward and support whatever direction they deem best to get White’s Ferry working for our region.”