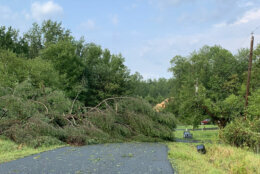 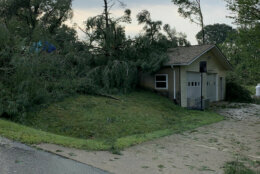 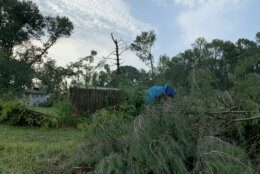 The National Weather Service said that a small tornado touched down near the Snowden Square Shopping Mall in Howard County, Maryland, during Thursday’s storms.

The storm left a quarter-mile long path of damage and peak wind gusts were estimated to have been around 70 mph.

“The damage survey will determine how strong winds were, what trees fell and structural damage,” NWS Meteorologist Connor Belak told WTOP. “Once we’re in the field and are able to actually get photos and investigate in person, we’ll be able to better estimate the magnitude of the winds.”

While a trained spotter saw a funnel cloud in the Fredericksburg area, there was no evidence that it made contact with the ground.

Belak said between 1 and 2 inches of rain fell in the Fredericksburg area, and hail ranging in size from an inch to an inch-and-a-half with fallen trees hit Spotsylvania County. Outages were also reported.

“It usually takes most of the day to do a thorough investigation, depending on how many areas were hit,” Belak said. “Once they communicate with the emergency managers in the area and do a full assessment, sometimes they’re done by the end of the day, sometimes they take multiple days to do it.”

On Thursday, the NWS issued a tornado warning just before 5:30 p.m. for Spotsylvania County and the City for Fredericksburg. A trained spotter also reported viewing a funnel cloud eastward toward the storm in Fredericksburg, but as of Friday morning a tornado has not been confirmed.

Surely the NWS will be out to survey as @7NewsDC chopper shows a swath of damage… some evidence that a tornado did hit in this area near Truslow Rd in Stafford County 🌪️ @BillKelly7News @SteveRudin7News @VJohnson7News @7NewsAlex @Brian7NewsDC @Eileen7News pic.twitter.com/uxcGSLLhQt

As we look toward the beginning of the weekend, Friday is looking drier and less humid. Here’s what you need to know.

Humidity levels will drop throughout Friday, and with breezy winds and plenty of sun, D.C. will finish the workweek on a nice note.

Storm Team4 meteorologist Steve Prinzivalli said with the majority of the severe weather out of the region, Friday should be a “sun-filled and fabulous day. It will still be seasonably hot with highs near 90, a breeze coming for the Northwest will bring down the humidity.

Saturday will start off cool with temperatures in the 60s before warming up to 80 and continued low humidity.

Some showers and storms are possible Sunday, especially later in the day and east of Interstate 95. However, Monday and Tuesday will bring in pleasant weather and sunny skies.

Saturday: Mostly sunny. Not as hot and much less humid. Highs: low to mid 80s.