Capitol Police officer Eugene Goodman, who diverted rioters away from lawmakers during the Jan. 6 riot at the U.S. Capitol, will throw out the ceremonial first pitch at a Washington Nationals game.
Listen now to WTOP News WTOP.com | Alexa | Google Home | WTOP App | 103.5 FM

U.S. Capitol Police officer Eugene Goodman, who diverted rioters away from lawmakers during the storming of the Capitol on Jan. 6, will receive a special recognition provided by the Washington Nationals.

Goodman will throw the ceremonial first pitch on June 18 before the Nationals’ series opener against the New York Mets, according to a news release.

On Jan. 6, Goodman redirected a group of rioters away from the Senate chambers, where lawmakers were hidden, and toward officers. The video of his actions gained attention worldwide, earning him praise for his bravery.

As a reward for his actions, Goodman, a resident of Prince George’s County, Maryland, escorted Vice President Kamala Harris to the presidential inauguration and was named the new acting Deputy Senate Sergeant at Arms. In February, the Senate voted unanimously to awarded Goodman with a Congressional Gold Medal for his “incredible bravery” and quick thinking.

Goodman is one of three well-known guests throwing out the first pitch at Nationals Park in June. Washington Football Team head coach Ron Rivera will throw the first pitch Friday before the Nationals play against the San Francisco Giants. It is scheduled to be the first game with the stadium opened at full capacity after Thursday’s match was postponed due to rain.

World renowned chief José Andrés will also provide the ceremonial toss on June 15 before the Nationals take on the Pittsburgh Pirates. 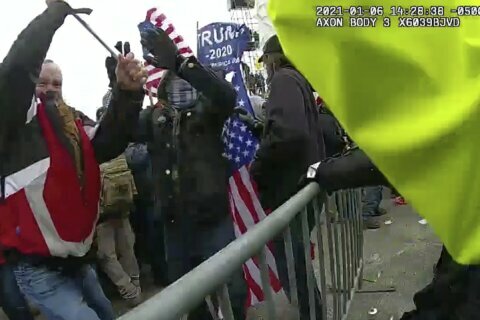