First responders who rescue folks who get into trouble on or near the Potomac River in the D.C. Metro area have a universal message — be cautious.
Listen now to WTOP News WTOP.com | Alexa | Google Home | WTOP App | 103.5 FM
(1/4) 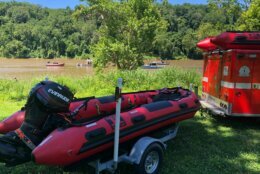 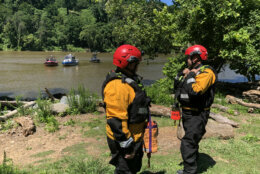 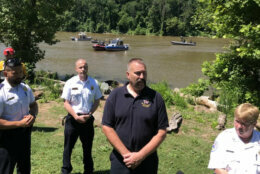 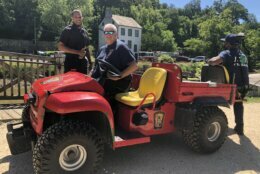 River emergencies don’t know boundaries, and first responders who rescue folks who get into trouble on or near the Potomac River in the D.C. Metro area have a universal message — be cautious.

Between Chain Bridge and Fletcher’s Boathouse, the water can range from 3 to 4 feet deep and then drop down to anywhere from 30 to 60 feet; at Spout Run, it’s 90 feet deep.

“On the surface it may look calm; however, the undercurrent is extremely powerful and will pull even experienced swimmers downriver,” Horos said.

In Maryland and D.C., it’s illegal to wade or swim in the Potomac River.

“Don’t approach the side of the river, because — especially in our area — the rocks are very slippery, and the river will not give you a second chance if you go in,” said Chief Corinne Piccardi of the Cabin John Volunteer Fire Department, which houses the swift water rescue team for the Montgomery County Fire and Rescue Department.

“We encourage you to come out; experience the beauty of the Potomac River — but do it from the shore,” Piccardi said.

Emphasizing the need to be prepared, Piccardi said emergencies on the pathways and trails around the river include people who become dehydrated or get sick because of unexpected demands during a hike.

In 2021 so far, there have been two Potomac River drownings in the D.C. area; last year, there were seven, and Piccardi said the swift water team was dispatched for 31 incidents of people distressed in the water.

D.C. Fire’s Special Operations Division Deputy Chief Danny McCoy had advice for people spending time around the river: be aware of your surroundings.

“If there’s an emergency on the waterway or on the shore, it’s really important to give us a clear description of where you are,” McCoy said. “If you can, identify some type of landmark.”

If someone goes under the water’s surface, do your best to note exactly where it happened. This will help rescue divers who work in near zero visibility.

And pay attention to the weather.

“One of the things we see regularly is when storms approach recreational kayakers or people who are on the waterway don’t heed the warning signs of large storms coming in, and then they get caught in the storm,” McCoy said.