Record summer rainfall and some flash flooding damaged several D.C.-area bridges, resulting in a need for repairs that may not be complete until next year. Here's what to know.
Listen now to WTOP News WTOP.com | Alexa | Google Home | WTOP App | 103.5 FM
(1/5) 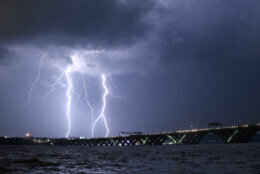 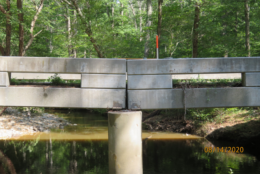 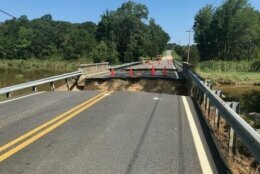 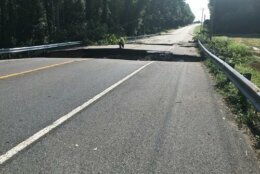 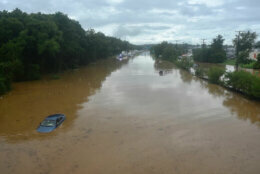 Record summer rainfall and some flash flooding damaged several D.C.-area bridges, resulting in a need for repairs that may not be complete until next year.

In July, August and September, tropical torrents unloaded bursts of heavy rain on localized parts of the region. The extreme rainfall rates and forceful runoff beneath the storms led to some significant erosion and, in some cases, road damage.

In one instance, drenching downpours targeted portions of Prince George’s County, Maryland, on July 6. More than 4 inches of rain fell around Clinton and Camp Springs. Water surged down creeks and swept across numerous roadways.

Temple Hill Road was unable to withstand the powerful discharge through Pea Branch during the July deluge. Prince George’s County Department of Public Works and Transportation said in a statement that the construction of a replacement bridge and closure of Temple Hill Road is expected to continue into next summer.

“The new bridge will be larger, wider and higher to improve vehicular safety. Pedestrians will be accommodated along a new sidewalk, and bicycles along wide shoulders that tie in with the roadway approaches to the bridge,” spokeswoman Paulette Jones wrote in an email.

Route 5 at Saint Clements Creek was washed out by the tropical storm. More than a month later, traffic is still being detoured to Maryland Route 238 and Route 234.

Plum Point Road remains closed at Plum Point Creek, after the heavy rain and flooding caused a portion of the road to collapse.

The Maryland Department of Transportation recently announced that the work to build Route 5 at Saint Clements Creek and Route 263 at Plum Point Creek will likely be finished by early October.

Meanwhile, the damage to Route 6 (New Market Turner Road) at Persimmon Creek was even more extensive. At least two sections of the road were washed out during the tropical rains. With a long-term detour in place, local traffic will be diverted to Flora Corner Road and Maryland Routes 5 and 235.

To put the rainfall from Isaias and subsequent events in perspective, the District and areas near the Beltway have recorded around 40 inches of rain so far this year, more than 10 inches above normal. But parts of southern Maryland near Hughesville, Huntingtown, Waldorf and Mechanicsville have seen nearly that much rain in just the last three months, and much more since Jan. 1.

Radar-derived estimates from the National Weather Service Advanced Hydrometeorological Prediction Service reveal a swath of 30 to 40 inches of rain has fallen along the Route 5 corridor from Clinton to Leonardtown since mid-July.

About a week after Isaias, with the ground still saturated and water tables high, torrential morning downpours overwhelmed many streams in Prince William County, Virginia. The force of the water hobbled a portion of Joplin Road near Marine Corps Base Quantico.

Photos from the scene show the force of the floodwater dislodged the bridge pier, causing sections of the bridge deck to shift.

“It was the highest peak flow that the USGS gauge adjacent to the bridge had seen in 69 years, classifying it as between a 100- and 200-year event,” Kamilakis said.

Later that same day, downpours resumed in Maryland, leading to more road closures. And a lot more rain fell in the weeks that followed.

On Sept. 10, the skies opened up again in southern Maryland, Northern Virginia and D.C. The 2.88 inches of rain from a deluge that Thursday set a daily rainfall record for Reagan National Airport. A soaking 3.44 inches of rain was recorded over a 24-hour period from late Sept. 9 into Sept. 10.

A recently-rehabilitated section of Beach Drive was gouged out by raging Rock Creek floodwater in D.C.

Liming said Beach Drive is expected to remain closed between Blagden Avenue and Peirce Mill for the next two to three weeks until an eroded section of roadbed is repaired.

“The work is likely to include removal and replacement of the section of the road that was damaged, and we’re working to get it open as quickly as possible,” Liming said.

Time lapse of flash flooding on Broad Branch Road today. I set this camera up and then beat feet to higher ground. Not everyone followed my lead… #dcwx #dctraffic pic.twitter.com/Di79eg1APq

Shantee Felix, spokeswoman for MDOT, said the State Highway Administration closed 22 sections of road because of high water that day. Route 50 in Cheverly was among them.

Runoff spilled over Beaverdam Creek and filled a low-lying portion of Route 50 between Kenilworth Avenue and the Cheverly Metro Station in up to 5 feet of murky flood water. At least four drivers were rescued from their submerged vehicles.

The flood-prone section of highway reopened late that evening, after the water receded into the creek and Anacostia River. While aerial extent of the flooding on Route 50 was beyond anything observed in recent memory, the highway was not damaged.

While there are no immediate plans to remedy the occasional flooding on Route 50, the transportation agency is working to mitigate the impact of recurring flooding on other roads.

“If the local maintenance shops and districts feel the location of the flooding is the result of a complex issue that requires some sort of change to the roadway or a structure, it is elevated to our highway hydraulics experts within MDOT SHA to commence a study of the area,” Felix said.

Culvert work and stream restoration continues along a marshy, low-lying section of Route 450 between Davidsonville Road and Parole. The highway near St. Stephens Church Road floods dozens of times every year.

The state also recently closed a portion of Route 251 in North Beach. The $6.3 million reconstruction effort entails a wider bridge elevated about 2 feet higher than the current roadway and the replacement of culverts and inlets along Bay Avenue.

The assessment of road washouts, shifting bridge piers and erosion throughout the region comes as the area enters one of the driest streaks of the year, with little measurable rainfall forecast through the end of the week.