The two new patients — a Harford County woman in her 80s and a Montgomery County man in his 60s — contracted the virus during overseas travel.

As a result of the new cases, Hogan plans to sign emergency legislation that would give him authority to use Maryland’s rainy day fund to pay for additional resources. A news conference is planned for Monday afternoon.

Virginia confirmed its second positive case of the new coronavirus Sunday, only days after D.C. and Maryland reported their first.

The second case in Virginia is a Fairfax city resident in his 80s, the Virginia Department of Health said in a news release. He first fell ill on Feb. 28 after traveling home from a Nile River cruise — similar to three residents of Montgomery County, Maryland, who have also been sickened.

He was hospitalized on March 5 and remains in stable condition.

At a news conference Sunday, Fairfax County Health District Director Gloria Addo-Ayensu said the man had limited contact with the public once he became ill.

The patient remains in a local hospital but is not in intensive care, health officials said.

The Centers for Disease Control and Prevention will be testing positive cases that local governments confirm.

“A coordinated public health response is already underway,” said Dr. Norman Oliver, Virginia’s State Health Commissioner. “While the risk to the general public is low, the Virginia Department of Health is working with [its partners] to identify people who had contact with the cases and may be at risk of becoming infected…”

The state’s epidemiologist, Dr. Lillian Peake, said both tests will be confirmed by the CDC. “At this point there are no signs of the virus spreading within the community in Virginia,” Peake said, adding that 44 Virginians have been tested for the virus; 36 tests were negative, and the state is awaiting results on the eight remaining tests.

Chief Pentagon spokesman Jonathan Hoffman tweeted that “the Marine recently returned from overseas where he was on official business. Defense Secretary Mark Esper and the White House have been briefed.”

D.C. Mayor Muriel Bowser also reported the city’s first positive that same afternoon — a 50-year-old District resident with no recent international travel history and no contact with a person known to have the virus. He first reported feeling ill Feb. 28 and was admitted to a D.C. hospital March 5.

D.C. Health is also aware of a recent visitor who later tested positive in a Maryland hospital. Several attendees of the AIPAC and CPAC conferences in the D.C. region also tested positive out-of-state after attending the events.

“With his test yielding presumptive positive, D.C. Health has started its investigation in keeping with CDC guidelines,” Bowser said. Health officials in both Maryland and the District are working to determine who their respective patients may have come in contact with before seeking care.

D.C. Health determined that a person with the virus visited Christ Church Georgetown, leading them to recommend the church pause its services while officials try to determine whether any exposures occurred.

The church said in a Facebook post that its rector, Tim Cole, has tested positive for coronavirus.

Flowers left outside the locked doors of Christ Church, around the corner from us. The church cancelled services today for the first time since the 19th century, after the rector was confirmed as DC’s first #corinavirus case. pic.twitter.com/bYEefH9dPo

Maryland has tested dozens of people for the coronavirus so far, returning its first three positive results in Montgomery County last week following an overseas trip. All are said to have mild symptoms so far, county health officer Dr. Travis Gayles said Friday.

Hogan expects more cases to emerge as the state ramps up testing this week.

The state also faces a challenge in balancing public awareness with patient confidentiality as residents seek more information with virus cases climbing across the East Coast.

“There’s a fine line between protecting the confidentiality and privacy of the patients — we don’t want to reveal their name or where they live,” Hogan said. “We try to find that fine line between making sure we’re keeping people safe without unnecessarily endangering the people who are sick.”

The number of U.S. coronavirus cases swelled to over 400 this weekend, with cases in about half of the states. Indiana, Minnesota, Nebraska and Pennsylvania also recently reported their first cases.

The full Fairfax County Health Department briefing is available below.

WTOP’s John Domen and The Associated Press contributed to this report. 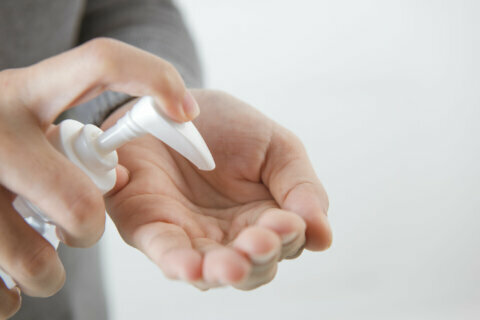