Coronavirus News: Fairfax Co. votes to increase substitute teacher pay | Is it time to get a COVID-19 booster? Which one? | Local cases of COVID-19 | How many in DC region are vaccinated?
Home » Local News » Self-driving shuttle, car shown…

More self-driving vehicles are being shown off in the D.C. region.

They include one known as “Tony” — short for “to navigate you,” said Dave Hofert, of Perrone Robotics.

The company created the vehicle by adding self-driving equipment to a Polaris Gem shuttle. The autonomous vehicle just finished up a trial run in Crozet, Virginia, where it gave rides between a residential area and downtown.

Tony was shown off at the Northern Virginia Technology Council’s Autonomous Technology Summit, along with a Chevy Bolt modified by students at Virginia Tech. That vehicle is part of a national competition between schools to develop a fully autonomous vehicle. 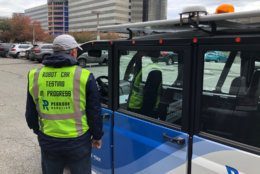 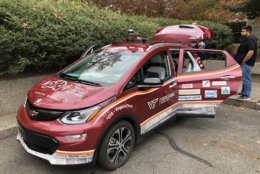 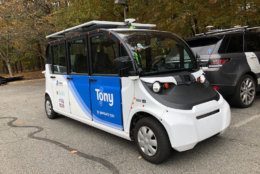 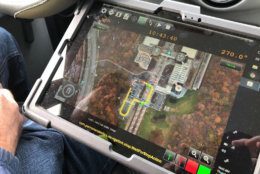 Already in the region, self-driving shuttles have run at Joint Base Myer-Henderson Hall in Arlington, Virginia, and in Maryland’s National Harbor.

A self-driving shuttle is also planned to run between the Dunn Loring Metro and the Mosaic District in Fairfax County.

While the shuttles do drive themselves, for now, a human stays on board to override any choices the autonomous vehicles make.

With holidays ahead, small businesses struggle with supply chain disruptions