Maryland State Police are still investigating a deadly hit-and-run that killed a tow truck operator while on the job Wednesday night in Temple Hills.

David Reinerio Pineda Alvarez, 63, of D.C., was in the area of Branch Avenue and Coventry Way around 10:30 p.m. Wednesday, assisting with a vehicle that had a flat tire that was on the shoulder of the road, state police said.

Alvarez was out of his tow truck when another driver struck the disabled vehicle on the driver-side mirror before hitting Alvarez and possibly the tow truck, state police said. He died at the scene.

Investigators said the tow truck had its flashing yellow lights on, and both the truck and the disabled vehicle were on the shoulder of the road.

State police described the suspect vehicle as a 1999-2007 white or beige Cadillac Escalade with possible passenger-side damage. Below is a picture of a similar vehicle.

AAA Mid-Atlantic said in a statement Thursday that the tow truck operator was contracted by AAA and that he was helping out a member that night.

“This tragic death highlights the dangers roadside workers face on the job daily and distinctly illustrates why ‘Slow Down, Move Over’ laws are critical to safety,” said AAA Mid-Atlantic spokesperson Ragina Cooper Ali in the statement. “To ensure safety, the best thing drivers can do is move over and away from vehicles and people on the side of the road.”

State police also are reminding drivers of Maryland’s “Move Over” laws, which are meant to ensure an extra barrier of safety for service crews and first responders on roads. A violation of the law is a misdemeanor that includes increasing fines depending on the seriousness of the violation.

Anyone with information about this deadly crash can call state police’s Forestville Barrack at (301) 568-8101. 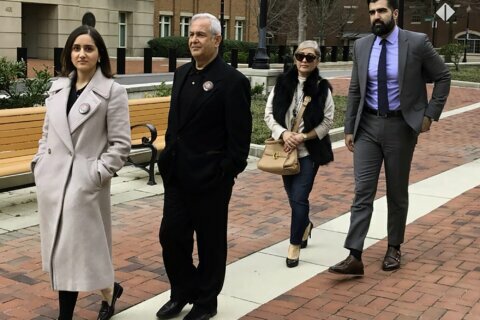