Virginia's Health Department reported six cases as of Sept. 5. And in D.C., there had not been any cases of vaping-related illnesses as of late August.
Listen now to WTOP News WTOP.com | Alexa | Google Home | WTOP App | 103.5 FM

The latest figures on lung illnesses related to vaping show that the number of cases has doubled in Maryland, from five reported on Aug. 28 to 10 reported on Sept. 3.

In Virginia, the commonwealth’s Health Department reported six cases as of Sept. 5. And in D.C., there had not been any cases of vaping-related illnesses as of late August.

On Sept. 6, the Centers for Disease Control and Prevention issued a notification that the agency was investigating “a multistate outbreak of severe pulmonary disease associated with e-cigarette product” use. That included the use of vaping devices, liquids, refill pods and/or cartridges.

On its website, the CDC noted that more than 450 “possible cases of lung illness” associated with the use of e-cigarette products had been reported in 33 states. Five deaths were confirmed in California, Illinois, Indiana, Minnesota and Oregon.

No deaths have been reported in D.C., Maryland or Virginia.

Symptoms of lung illness connected to vaping include shortness of breath, chest pain, wheezing and coughing. According to the Maryland Department of Health website, other symptoms can include “fever, chills, nausea, weight loss, vomiting, diarrhea or abdominal pain.”

Maryland health officials said the cause has not been tied to “any particular device, substance or brand.” In Maryland, cases of patients who became ill included those who used both devices that contained nicotine and marijuana or THC products.

On Wednesday, President Donald Trump said his administration will propose banning flavors used in e-cigarettes amid health concerns connected to vaping across the U.S. 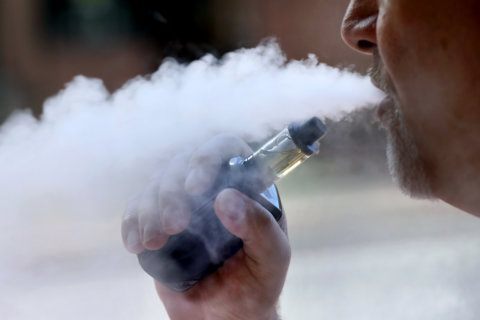