An ethics investigation found evidence of "multiple violations" by Metro Board Chairman Jack Evans regarding conflicts of interest and attempts to use public office for his own financial gain, according to a summary released late Monday.
Listen now to WTOP News WTOP.com | Alexa | Google Home | WTOP App | 103.5 FM

An ethics investigation found evidence of “multiple violations” by Metro Board Chairman Jack Evans regarding conflicts of interest and attempts to use public office for his own financial gain, according to a summary released late Monday.

A letter from Ethics Committee Chair Clarence Crawford to Maryland Gov. Larry Hogan and Virginia Gov. Ralph Northam outlined a series of violations of Metro’s founding compact and the board’s own ethics rules, and said that Evans’ announcement last month that he would not seek another term as board chairman was due to the findings.

Crawford had declined to confirm that at the time.

Despite the findings by an outside law firm of multiple violations, the four-member Ethics Committee, consisting of one appointee each from Maryland, Virginia, D.C. and the federal government, could only reach a majority opinion on one violation against Evans: of a duty to avoid conflicts of interest regarding a Colonial Parking consulting contract.

The committee was deadlocked on two other violations identified in a six-week investigation by outside lawyers from Schulte, Roth & Zabel conducted into accusations that Evans had used his position at Metro for personal gain.

“Consistent with these conclusions, the Ethics Committee determined that Mr. Evans would no longer be chair of the WMATA Board, and would amend his annual disclosure forms from 2016 to the present to list his consulting agreement with Colonial Parking,” Crawford wrote.

Based on the letter, the agreement appears to have been that Evans would leave his role as chair, he would update his disclosure forms that were at the heart of key pieces of the Metro investigation, then Metro would allow any D.C. Council probes and federal investigations to play out. Only the D.C. Council has the power to remove Evans from the Metro Board.

Evans’ lawyer, Mark Tuohey, disputed the outcome described in Crawford’s letter, since he said there was no formal vote finding Evans violated the Metro Board’s code of conduct, and the investigation is closed.

“The letter that I saw today by Mr. Crawford to the governors of Virginia and Maryland not only under the rules of the committee in executive session was unauthorized, but, most significantly, it falsely represents the findings of the committee. The committee did not find any violations by a majority vote, and that’s why it’s very unfair,” Tuohey said in an interview.

Tuohey said Evans cooperated fully with the outside investigation, and echoed Evans’ claims last month that there was no agreement with the members of the committee regarding Evans’ role as board chairman prior to the investigation being closed.

The Ethics Committee has the power to “resolve” investigations, but Metro’s ethics policy also calls for formal action against board members to be taken in public sessions.

“Had there been a violation, we would have reported out a violation,” said D.C. Metro Board member Corbett Price, an appointee of D.C. Mayor Muriel Bowser.

He called the letter “bizarre,” and said the lack of public action supports Evans’ version of the Ethics Committee outcome.

Price served on the committee in place of Evans, and said in an interview that the committee rejected the outside law firm’s findings after an oral presentation. “We certainly did not accept the lawyer’s report — period. He did not make a persuasive enough case to convince us of anything,” Price said.

Price questioned why the letter was even sent out Monday, so soon after Hogan, the person who appointed Crawford to a term ending next week, had requested more information.

“A chairperson of a committee does not have a single sole authority to generate a letter,” Price said. “I am extremely disappointed with this. You have someone’s career in your hands when you do this sort of stuff.”

Hogan had called for Evans to resign from the Metro Board last month.

Crawford did not run the letter past the committee before sending it, Price said, and was not authorized to disclose the internal ethics deliberations.

According to Price, in any formal votes that were taken, Crawford was the only one to support a finding of a violation, and any other statements are “totally bogus.”

Crawford leaves the board at the end of the month, which Price said should allow new officers who will serve as the Ethics Committee to refute his statements. “I have a strong sense that, in fact, that Ethics Committee will be able to deal with this effectively,” Price said.

Virginia Metro Board Member Paul Smedberg, another member of the current Ethics Committee declined to comment. Federal appointee David Horner, the fourth member of the committee, did not immediately respond to a message.

What the investigation found

The Metro investigation did not address accusations that Evans also used his D.C. Council position for similar private benefit. Evans has been reprimanded for that by the D.C. Council, and apparently remains under federal investigation.

“The investigation found evidence of multiple violations of the Ethics Code and Compact by Mr. Evans related to three primary areas: (1) Mr. Evans’s efforts regarding WMATA on behalf of Colonial Parking; (2) Mr. Evans’s actions at WMATA to assist Digi Outdoor Communications & Digi Outdoor Media (collectively, “Digi”); and (3) Mr. Evans’s 2018 business plan used in connection with his efforts to obtain a job with a private law firm,” Crawford’s letter to the governors said.

The governors had requested the information in their own letter to the Metro Board sent earlier Monday.

According to the investigation, Evans failed to disclose his consulting agreement with Colonial Parking and his close friendship with CEO Rusty Lindner before he worked to help the company in dealings with Metro by initiating investigations into a competitor and sharing ridership information with Colonial.

“By repeatedly and proactively taking action that would benefit Colonial and Lindner, at or during the same time that Mr. Evans was being paid $50,000 per year, Mr. Evans improperly used his position at WMATA for his own personal financial gain and/or for the private financial gain of his close friend Lindner and Colonial by virtue of Mr. Evans’s consulting agreement,” the investigation found.

The $50,000 consulting agreement with Colonial Parking also constituted a solicitation and acceptance of money in connection with his official duties, the outside law firm concluded.

The investigation found similar violations related to Digi’s sign projects and concluded Evans’ violated a ban on using his official position for his financial gain in his 2018 business plan that solicited a job in connection with his official duties. 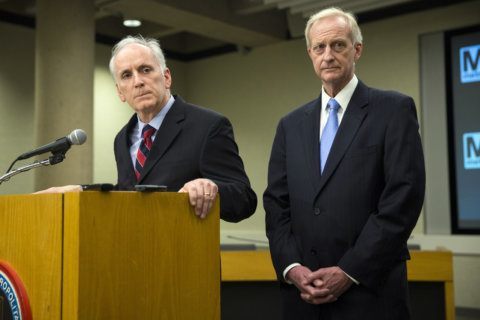