Tornado touches down in Howard Co. during DC-area storms

The National Weather Service confirmed Thursday that a tornado touched down in Howard County, Maryland, at 3:34 p.m.

It happened in Columbia, along state Route 32. The EF-1 tornado took the roof off an office building on the 9700 block of Broken Land Parkway. An EF-1 level tornado has a wind speed of between 86 to 110 mph.

A line of strong thunderstorms passed through the D.C. area Thursday afternoon, bringing downed power lines, more than 100,000 power outages and at least a few swamped vehicles to the region.

Howard County spokesman Mark S. Miller said that there had been reports of many trees down along the northside of Maryland state Route 32 near the Shaker Drive area, and the National Weather Service surveyed the area to determine if a tornado touched down.

A possible tornado in #ColumbiaMD, I’m seeing sheared trees in a clear and defined path of destruction moving in an east-west direction near the intersection of Rt 32 and 29 from #Chopper4 #BREAKINGNEWS #mdwx #stormdamage @nbcwashington @amelia_draper @dougkammerer pic.twitter.com/xYaGYDjaMv

D.C.; Arlington, Virginia; and Hyattsville, Maryland, were under a Tornado Warning for a time. At 3:46 p.m., the National Weather Service said a severe thunderstorm capable of starting a tornado was located “over the U.S. Capitol, or over Nationals Park.”

In Rockville, Maryland, 16-year-old Sophia Abedellatif was home alone when the storm hit and the power went out in her house. She said that she went downstairs to get a drink and saw a fire outside and a huge tree that had fallen.

Picture of the transformer fire after the tree fell. (Credit: Sophia Abedellatif) pic.twitter.com/iBJ0VM3J2Y

She called 911, grabbed her two dogs and waited outside in the rain for first responders. Her father, Yousef, was at work in Bethesda and he said that he “freaked out” when he saw the pictures she sent. He said that where the tree had fallen is where he would have normally parked his car had he been home. 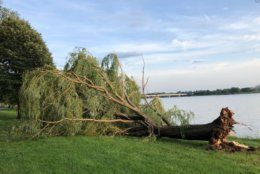 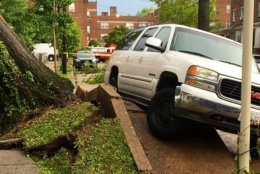 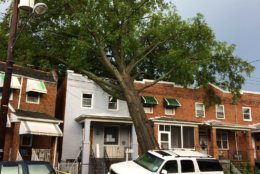 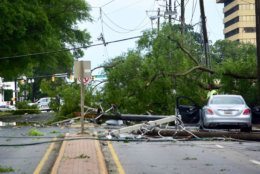 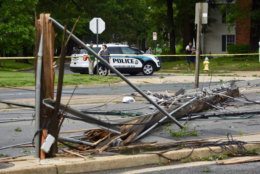 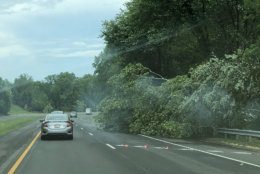 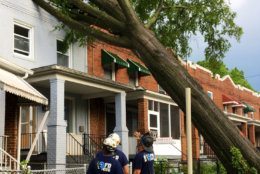 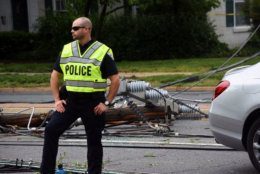 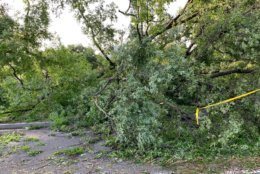 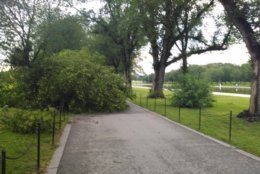 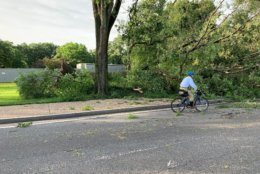 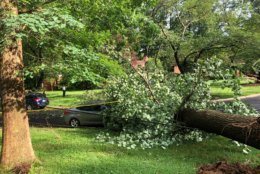 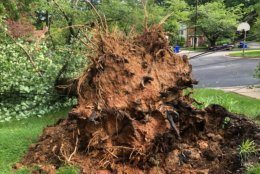 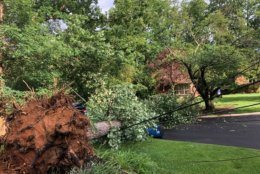 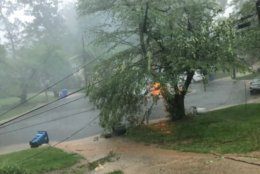 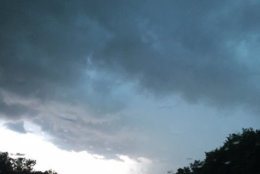 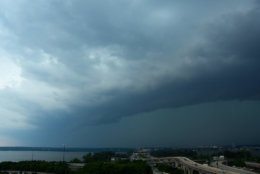 In D.C., a tree fell into a house on 18th Place in Southeast. No one was hurt, but two workers and a resident had to be evacuated. And that was far from the only house to be hit by a tree.

The strong storms caused further damage to the toppled mulberry tree on the grounds of the Washington Monument that was repaired yesterday. NPS said that the force of the storm moved the tree’s temporary support, but the agency is hopeful that the tree can be saved.

The force of the storm moved the Washington Mon mulberry tree off of its temp support causing additional damage to its limbs. Initial assessment is hopeful that it can be saved again, but we won’t do a thorough analysis until the hazard trees around the Natl Mall are cleaned up. pic.twitter.com/IEtSkWYE5i

Downed lines and debris in the roads are combining to play havoc on the roads; keep an eye on WTOP’s Traffic page.

Pete Piringer, of the Montgomery County Fire and Rescue Service, said via Twitter that wires are down throughout the county, and that at least one road has been closed due to downed power lines, and that at least one person has already been rescued from a car that was stuck in high water on Rockville Pike near the Beltway.

In Arlington County, Glebe Road was closed between Henderson Road and U.S. 50, as crews cleared debris from a fallen tree.

In the wake of Thursday’s storms, a cold front moves in overnight that will shift winds from south to northwest. The temperature drops to the near 50s, leading to a refreshing Friday with sunshine and lower humidity, Storm Team4 meteorologist Amelia Draper said.

WTOP’s Mike Murillo and Dave Dildine contributed to this report from Rockville, Maryland, and Arlington, Virginia. 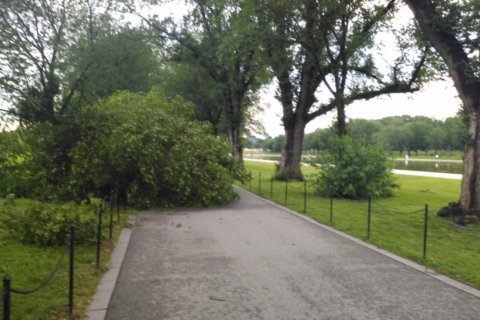 Check WTOP Traffic for the latest on blockages