The D.C. region's population keeps growing, though not as fast as it was earlier this decade. And the reasons behind the sustained growth might be surprising.
Listen now to WTOP News WTOP.com | Alexa | Google Home | WTOP App | 103.5 FM

The D.C. region’s population keeps growing, though not as fast as it was earlier this decade. And the reasons behind the sustained growth might be surprising.

New numbers out Thursday from the Census Bureau look at the estimated population growth nationwide from July 2017 to July 2018.

Overall, the D.C. metro area is the sixth-most populous region in the country, edging out the Miami-Fort Lauderdale region. But on a broader, regionwide level, the biggest (but not only) reason more people live in D.C., Maryland and Virginia now than they did a year ago is simple: They immigrated here.

Here’s a breakdown of D.C., Maryland and Virginia.

Earlier this decade, D.C. routinely saw population jumps over 10,000 per year, though between July 2017 and July 2018, the increase was 6,764. That’s a 1% population increase, and a big chunk of that came about because there were more than 4,000 babies born compared to the number of people who passed away.

In terms of domestic migration, close to 1,000 more people moved from D.C. to another state compared to the number of people who moved to D.C. from another state.

There were nearly 31,000 more births than deaths during that time period. The rest of the population increase was driven by foreign migration. More than 30,000 people moved to Virginia from other countries, while nearly 10,000 people left the commonwealth for another state. Again, that foreign migration number includes soldiers who were deployed overseas and then relocated to Virginia, as well as anyone who moved there from Puerto Rico.

However, as is largely the case, the increase is driven by people who immigrated to the state. Their immigration status, and where they came from, isn’t given in the breakdown.

Loudoun County saw by far the biggest growth over the last year, adding nearly 10,000 residents, way more than any other jurisdiction.

The second-fastest growing county in terms of population was Chesterfield County, which added almost 5,400 residents.

Many of the counties that lost population were the more rural areas.

Overall, Maryland’s population rose just 0.3% with the state’s suburban and exurban counties experiencing growth, while the rural parts of the state as well as the urban center saw declines.

That’s the case even though more than 24,000 more people moved to another state from Maryland, compared to the number of people who settled in Maryland from another state. It’s a smaller number than what states like New York, Illinois and California all saw — more than 100,000 residents moved away from those states — but still a big reason why the population barely grew.

More than 22,000 people moved to Maryland from other countries. Again, that foreign migration number includes soldiers who were deployed overseas and then relocated to Maryland, as well as anyone who moved there from Puerto Rico.

The number of births recorded in Maryland was also almost 20,000 more than the number of deaths.

Nationally, the population continues to grow and is on pace to hit 330 million by the end of the decade.

That growth is happening in other parts of the country, though, the South and West in particular. Regionally, the Northeast and the Midwest (in that order) all saw population declines as more people moved to other states in the South and West.

International migration (which includes the same caveats listed above for D.C., Maryland and Virginia) is the only reason those population declines weren’t even more substantial.

The South in particular grew by more than 1 million people, in part because it added over 345,000 people from other parts of the country. It also drew the highest number of international migrants. 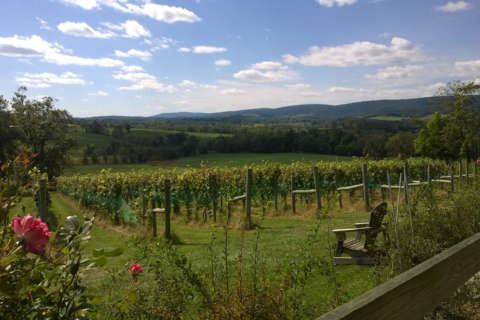