ALEXANDRIA — The harsh reality of choosing which diabetes-related prescription to renew awaits a furloughed federal worker who was among those sharing stories with Virginia’s U.S. senators on Friday.

U.S. Sens. Mark R. Warner and Tim Kaine, both Democrats from Virginia, held the listening session in Alexandria to hear people’s concerns and about how they’re coping.

“I’m coming up to where all my refills [need to be refilled], and I’m like, ‘OK — which one of these medicines do I need most?'” Gabourel said.

Brian Uholik, of Alexandria, had trouble getting his 7-week-old daughter, Wynnalise, on the family insurance plan because of the shutdown. “The doctor prescribed some medication for her; I went to the pharmacy to pick it up and they informed me she wasn’t on the plan,” Uholik said — adding that isn’t easy getting insurance problems sorted out when your human resources department is furloughed.

“Having a daughter who’s 7 weeks old and not knowing when your next paycheck is coming is a little bit stressful,” Uholik said.

Uholik is a trial attorney at the Department of Justice, and said he left private practice to join DOJ two years ago “to go into public service to serve something greater than myself.”

Some of those gathered to talk with the senators expressed frustration at not feeling appreciated or having the work they do considered essential.

“It hurts your moral to hear that you’re not essential — don’t come to work,” Joanna McCleland said. She works in a Customs and Border Protection office that oversees programs like President Donald Trump’s border wall proposal — “on these very programs that Congress is arguing about right now.”

She said she was an Air force veteran, worked for the public school system in Colorado and then “took an internship with DHS and picked my family up and moved out here three and a half years ago to serve my country.”

The potential long-term consequences of the partial government shutdown, even after it ends, concern some people. For example, some said, if a worker with a security clearance misses a car payment, that could cause their credit rating to suffer, and perhaps put their security clearance and job in jeopardy. Another speaker mentioned having to pay a penalty to withdraw money from an IRA in order to have money to live on.

Aviation safety inspector Dan Ronneberg, who works at the Federal Aviation Administration, said he was raised to believe government service is an honor.

“That it’s an honorable undertaking. That you’re doing something for your country, for your fellow man for your community. And I’m not doing that today,” Ronneberg said. As for the work left undone on his disk, “I had a request from the Department of Defense to authorize civilian helicopter operators in Iraq.”

With her son Ayan in her lap, Vidisha Parasram, of Alexandria, was among those who discussed growing backlogs of work at empty offices or time-sensitive issues that won’t get addressed. Parasram is an investigator and the director of incident screening at the Chemical Safety Board. “There was just an incident in Houston this past weekend that we’re not even considering deploying to,” Parasram said. 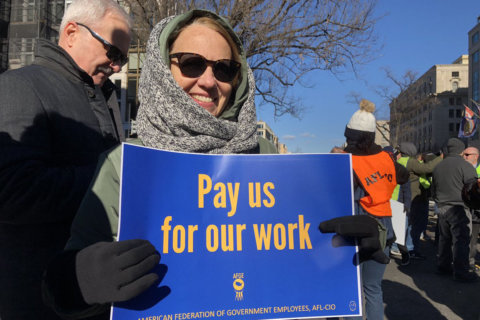