The D.C. area, including all of northern Maryland, is under a flash flood watch until 2 a.m. Sunday. The start of the heavy rain that's expected to continue throughout the week has already impacted traffic, led to some power outages in the region and canceled the Nationals game Saturday. Here's what you need to know.
Listen now to WTOP News WTOP.com | Alexa | Google Home | WTOP App | 103.5 FM
(1/7) 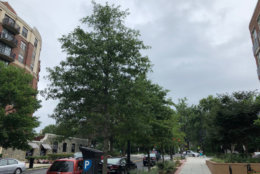 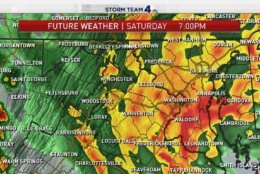 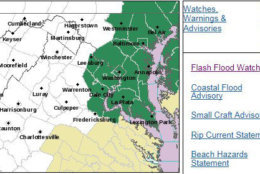 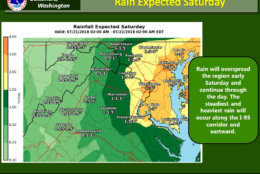 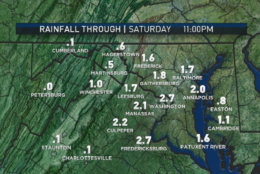 WASHINGTON — The D.C. area, including all of northern Maryland, is under a flash flood watch until 2 a.m. Sunday.

Flash flood warnings are in effect for the following areas:

Parts of northern Virginia, including Loudoun, Fairfax and Prince William counties, are under a flood warning until 1:45 a.m. Sunday.

The start of the heavy rain that’s expected to continue throughout the week has already impacted traffic, led to some power outages in the region and canceled the Nationals game Saturday.

Tonight’s game against the Atlanta Braves has been postponed due to inclement weather.

With the heavy rain pouring down in the area, power outages have been reported in the region.

As of 9:45 p.m., more than 400 Pepco customers in Prince George’s County were experiencing power outages and more than 1,500 Dominion customers were still without power in Fairfax County.

The Fairfax campus of George Mason University was also currently without power, reported around 1:30 p.m. on the school’s IT website, but the issue was resolved around 7:15 p.m.

The National Weather Service said the heavy rain is expected to continue into the evening. The region can expect as much as two to four inches of rain.

The National Weather Service said shoreline inundation is expected along portions of the seawall adjacent to Ohio Drive and the Hains Point Loop Road near the Tidal Basin and Jefferson Memorial.

Minor inundation flooding up to one foot above ground is possible elsewhere.

Saturday’s rain is expected to be the beginning of an “ugly” weather pattern that settles over the D.C. region this weekend, bringing rain showers and thunderstorms every single day for up to a week.

“We are wedged between a blocking pattern with an area of high pressure in the Midwest and another strong one in the Western Atlantic,” said Storm Team 4 meteorologist Lauryn Ricketts.

“This means that with a trough parked over with nowhere to move, we are looking at daily rain chances at least through Thursday.”

Ricketts said another area of low pressure moving out of the Ohio Valley means there won’t be much let-up on Sunday either.

“While it will rain the entire day Sunday, Sunday will be our best chance for some scattered storms as well,” Ricketts said. “We could have a few peeks of sun, but it is not looking like a good pool day.”

The coming rain is a sharp change in the weather pattern for the month.

Until a brief torrential downpour July 17, Reagan National Airport had recorded only a trace of rain for the entire month so far.

That’s the only time on record, going back to 1871, that no measurable rain fell in the first 15 days of July, according to the National Weather Service.

The rainy weather has led to delays.

WTOP’s Dave Dildine says there are no significant reports of flooding yet, but there are deep puddles on some area roads as the rain continues to move in.

On the George Washington Parkway, near Interstate 395 and the 14th Street Bridge, water is rising in the left lanes but the right lane is passable.

Between Annapolis and Davidsonville, all lanes on Maryland Route 450/Defense Highway are blocked by street flooding between St. Stephens Church Road and Huntwood Drive.

Drivers along Interstate 66 should stay alert on the right side on westbound lanes after Interstate 495 due to street flooding. The eastbound left lane is impassable between U.S. Route 50 and Route 123.

On Interstate 95, a jackknifed truck on the southbound lanes after the Marine Corps Base Quantico has caused significant delays. The accident has been cleared and all lanes are now open.