Coronavirus News: Fairfax Co. votes to increase substitute teacher pay | Is it time to get a COVID-19 booster? Which one? | Local cases of COVID-19 | How many in DC region are vaccinated?
Home » Local News » Local volunteers, rescue teams…

Volunteers and two rescue teams from the D.C. area are heading to the Lone-Star state to help with relief efforts as the state grapples with historic flooding from Tropical Storm Harvey.
Listen now to WTOP News WTOP.com | Alexa | Google Home | WTOP App | 103.5 FM

WASHINGTON — Volunteers and emergency responders from the D.C. area headed to the Lone-Star state on Sunday to help with relief efforts. Harvey came ashore as the fiercest hurricane to hit the U.S. in 13 years and the strongest to strike Texas since 1961’s Hurricane Carla, the most powerful Texas hurricane on record.

Nathan DeVault with the American Red Cross National Capital Region said about 18 volunteers have been deployed to either Texas or Louisiana.

Hurricane Harvey has weakened to a tropical storm, but continued to drench the Gulf Coast and the worst still might not be over in Texas. The forecast calls for rain to continue over the next few days, raising fears of continued flooding.

According to the Red Cross, hundreds of volunteers from all over the United States are already on the ground in Texas, and thousands more will be deployed in the coming weeks.

The first of two emergency response vehicles from the D.C. area left for Texas Sunday morning. Red Cross volunteer Peter Benjamin, along with a colleague, is driving one of the vehicles to Texas. He said it will take a few days to arrive.

“I know that we have over 200 of these vehicles that are currently in route going to Texas, not all of them coming from the Washington area,” said Benjamin. “They’re coming from all over the United States.”

The Red Cross uses the vehicles to feed residents in the disaster area and to distribute supplies.

“We’re going to be feeding people who don’t have electricity, don’t have water and really need assistance,” Benjamin said. “It makes a big difference because people haven’t had it for days.”

The Red Cross has 20 shelters already set up in Texas, but because of the continued rain and flooding they are set to expand that number to 50 shelters, according to Benjamin. He expects to be in Texas for a few weeks.

Benjamin said that new Red Cross volunteers will rotate in every two weeks, but the Red Cross will continue to be there as long as there’s a need.

The Red Cross depends on financial donations to be able to give immediate relief in disaster situations, and Benjamin said there is an urgent need for donations.

“At this point we’re using up enormous sums of money in order to provide all of the assistance that we do provide.” 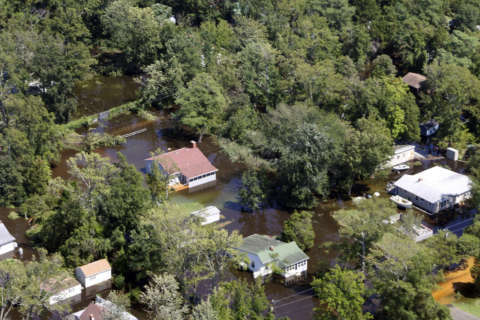 Harvey is worst TX storm since ’61’s Carla. How it stacks up