WSSC has been dealing with an overall rise in water main breaks, with the annual total now reaching about 2,000.

“What happened I think in the past was we put all of this stuff in the ground, and there needed to be a point where we started to replace it,” WSSC Chief Engineer Gary Gumm told WTOP.

“I think we were a little late getting started on it.”

Now, the utility is replacing about 60 miles of piping each year. That’s roughly 1 percent of the roughly 5,800-mile-long system. At the current pace, it would take almost 100 years to replace WSSC’s entire system.

WSSC has been replacing more piping lately than in the past. Now that the system is using more durable, stronger zinc-coated iron pipes, the pipes are expected to last longer.

“I’ve been putting pipes in the ground, that overall trend is up,” said Gumm.

When exactly isn’t clear, but Gumm is confident that the number of water main breaks will decrease once more piping is replaced.

“I think once we get it under control and maintained and stay with it, they won’t experience that, but they will still experience the inconvenience of having their street torn up somewhere in our service area,” Gumm said. 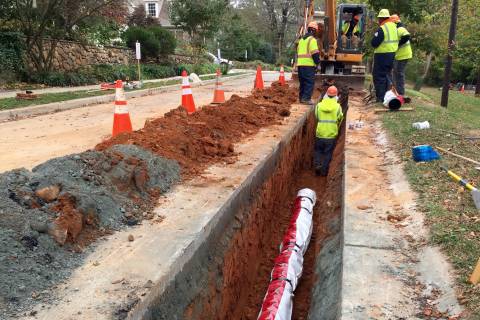