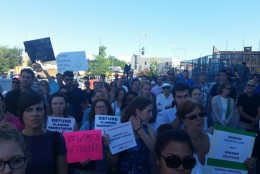 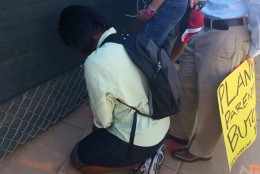 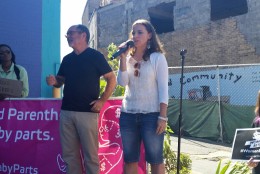 WASHINGTON – Hundreds of people protested Saturday outside a Planned Parenthood under construction in D.C., one of several events staged in a national day of protest against the organization.

Protests were held in more than 300 cities, 47 states and five countries. In D.C., the protesters were at a Planned Parenthood site being built at 1225 4th St. Northeast. They are calling on Congress to investigate what Planned Parenthood does behind closed doors.

Fueling the outrage is the recent release of covert videos recorded by anti-abortion activists that showed Planned Parenthood officials talking about how they sometimes provide medical researchers with tissue from aborted fetuses.

“The investigative videos that came out show that babies and organs from aborted babies are being trafficked and harvested,” said Arina Grossu, one of the speakers at the protest.

Planned Parenthood has maintained that the videos were highly edited and contends that what it does is legal. But Grossu, who is the director for the Center for Human Dignity at the Family Research Council, said watching the unedited versions don’t change the context.

“You can never take that out of context and it’s not about tone.”