Holidays: 'Enchant' shines with millions of lights in Nats Park | Where to see holiday lights | Send in photos of decorations | How to give greener this season
Home » Washington, DC Sports » How bocce in D.C.…

How bocce in D.C. has grown into America’s next rec sport 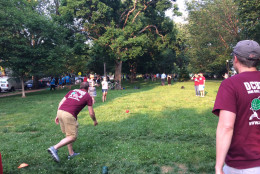 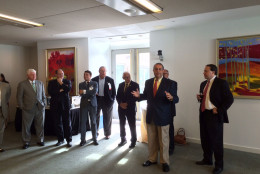 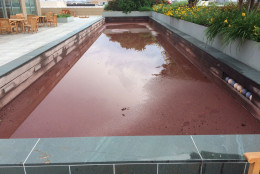 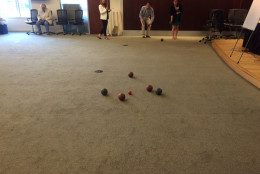 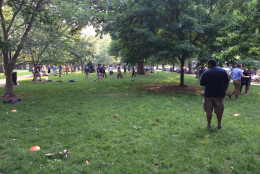 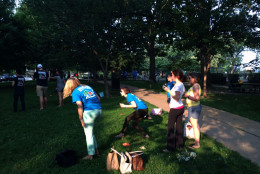 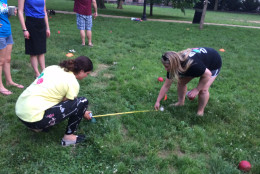 WASHINGTON — On the rooftop of an office building near the Verizon Center in downtown D.C., a group of politicians and lobbyists gathers for the Third Annual Congressional Bocce Tournament. The scene is what you might expect — a stately, convivial affair with more pomp than competition, forced inside due to stormy weather for the third consecutive year.

“It’s my great disappointment not to be able to show that I’m the greatest bocce player in the U.S.,” chuckles Rep. Bill Pascrell, D-N.Y., who is also the co-chair of the Italian-American Congressional Delegation that organized the event.

No matter — there are drinks and hors d’oeuvres, and the celebration of culture remains, even if the competition is an abbreviated version played on carpet while thunder booms between sheets of rain outside.

This is how many likely imagine the sport, more of a ceremonial game played in small pockets by an older generation. But bocce is played by far more than simply dignitaries and Italians looking to preserve a piece of their cultural heritage here in the District. Based on its explosive growth over the past decade, you might even call D.C. America’s bocce capital.

A Wednesday trip to Garfield Park, a misshapen trapezoid of green covering two city blocks hugging the Southeast Freeway at the base of Capitol Hill, reveals an unexpected rebirth of the game among D.C.’s young professionals.

D.C. Bocce registered roughly 2,000 players this spring, and is expecting roughly 6,000 total this calendar year. There are now a dozen leagues on different days of the week, stretching from Alexandria, Virginia to Bethesda, Maryland. That’s impressive growth since the league first started with 50 participants in the fall of 2004. But the growth hasn’t been contained to just the D.C. area.

In 2011, D.C. Bocce launched the Major League Bocce brand, an extension of what they did here in the District. They have sprouted leagues in 10 other cities, from Boston to Austin.

Some leagues have become so popular, they fill up almost immediately after online registration opens.

“It’s harder to register for bocce than it would be to get tickets to go see Madonna,” says Sarah DeLucas, one of D.C. Bocce’s original founders, who quit her day job in 2010 to focus on running the ever-expanding league.

DeLucas is one of four partners, two of whom work for the league full time, who have shepherded the game’s steady growth. The group saw a need for a recreational activity that anyone could enjoy comfortably, no matter their age, gender or athletic prowess.

“We started it when we were relatively new to D.C.,” she says. “We played in other sports leagues, but always felt they were lacking something.”

D.C. Bocce players range from 21 to 65, with the average player in his early 30s. Like D.C. itself, but unlike many fellow rec sports, it skews more female than male, with women making up roughly 55 percent of the players.

At $50 per person, registration gets you six games, along with a T-shirt. Everybody makes the playoffs, which are seeded based on record. The league supplies the balls, so there are no other expenses other than whatever you want to bring along to imbibe while you play.

“This is your equipment,” says DeLucas, holding up her hands. “This and a Solo cup.”

The game is played using traditional bocce rules, or as traditional as you can get on a sloped piece of park grass with a beverage in your non-throwing hand. One team throws a tiny white ball, called the pallino, which is roughly the size of a golf ball. Then the teams alternate throws to try to get as many of their balls closer to the pallino than the opposite team’s closest ball. Only one team scores points per round, whichever has the closest ball. For each ball the scoring team places inside the opponent’s closest ball, one point is awarded. Game is to 16.

The division here at Garfield has 32 teams, the largest contingent in the league. This day, at the original site, the ground zero of D.C. bocce, teams are playing the Sweet 16 and Elite 8 playoff rounds to weed the field down to the Final Four.

Sporting matching, league-provided teal shirts, Ballin’ Like a Llama is a team of former co-workers at a nonprofit in D.C. For this group, bocce has been a way to stay in touch as life pulls them in different directions.

“I always thought bocce was something only played at family barbecues,” says Emily Kuhn, a Llama team member. “When I explained it to my parents, they were very confused. But now it’s our little get together every week.”

The friends used to play more traditionally known rec sports, but grew tired of the pressure and expectations levied on them by other members, especially in coed sports.

“Emily and I were on a softball team the last couple years,” explains Angie Peetchatka, a fellow Llama. “Some of the people were really bad about (participants’) athletic abilities.”

In bocce, the skill set required is only a modicum of hand-eye coordination. And because players from both teams stand on the same side of the court while they play, there is much more fraternizing between competitors. All participants are invited to the same neighborhood bar afterward.

“There are worse ways to meet people,” says Peetchatka.

At the other end of the park, Bill Baron exemplifies her statement. Baron, who now lives in Alexandria, has been competing in the Capitol Hill league for nearly a decade. It’s worked out pretty well for him, with his team taking home the title multiple times. It’s also how he met his wife, although he isn’t featured on the link on the website to bocce couples of fellow players who also have met through the league.

“It’s just a huge friendship network,” says Baron, whose Urban Light team was named after a charity a friend started.

Baron used to play rec league basketball, but appreciates that he can still feed his competitive fire without any animosity toward the other team, and without the injury risk.

“This way I can still be very competitive without blowing my knee out,” he says.

The fire for competition varies from team to team. But while the outward appearance of most squads is quite easygoing, there’s still the underlying flare for sport.

“It’s very passive-competitive, very friendly on the outside,” says Scott Curry of Southwest D.C., one of Baron’s friends and Urban Light teammates. “A third of the teams really want to win. We’re one of them.”

Both Urban Light and Ballin’ Like a Llama advance to the round of eight, where the latter is pitted against DeLucas’ team, Just the Tip.

“It’s time! It’s time!” a Llama team member exclaims as she gathers her belongings to move to the part of the park where their Elite Eight match is slated to start. “Let’s grab the chips and salsa.”

While the game goes back and forth early, Just the Tip pulls away to advance to the Final Four. No hard feelings and no worries for Kuhn, Peetchatka and the rest of Ballin’ Like a Llama. They’re already registered to play again this summer.