WASHINGTON — Incumbent At-Large Councilmember Elissa Silverman and challenger Dionne Reeder say the battle for the seat is not about Mayor Muriel Bowser.

Earlier this month, Bowser endorsed Reeder in her race against Silverman, but each candidate maintains they are competing against each other, not running with or against Bowser

“I’m running against who’s on the ballot,” Silverman responded.

Reeder said she has gotten to this point through her experience as a staffer for former mayor Anthony Williams, and her current role as a restaurant owner in Anacostia.

“I ran this race for one year without the support of anyone but the individuals who supported me as residents of the city, community activists, and people who believe in my ability to be a successful candidate.

Silverman has often challenged Bowser during her years on the council.

“That is my approach as a councilmember, to vigorously and aggressively perform oversight over city agencies, to make sure our government is serving our residents and businesses well,” Silverman said.

The incumbent pointed to paid family leave act, which she co-authored, as a success, though small business owners have criticized it.

“I’m thrilled to have been a champion of paid family leave, which will give District workers to the opportunity to take care of themselves and family members, at the most critical times of their lives, without risking financial calamity.”

Reeder opened a restaurant, Cheers, in Anacostia three years ago.

“We have a food desert in Ward 8,” said Reeder. “Me actually opening a restaurant there was to fill a need, not become rich.”

In the District, every two years, two of the city’s four at-large seats are on the ballot. Voters cast two votes, and the top two vote recipients get the seats. But, under the Home Rule Act, only one seat can be filled by a Democrat.

Incumbent Anita Bonds, who won the Democratic nomination in June, is expected to win one of the seats.

Reeder and Silverman are both Independents.

The candidates differed on the now-repealed Initiative 77, which would have raised minimum base pay for tipped workers to a standard minimum wage.

“I believe the voters spoke,” Silverman said. “I tried to put together a package that would uphold the will of the voters, as well as listen to the restaurant and hospitality community, which is very large and a key industry in our city.”

Restaurant owner Reeder said she didn’t personally take an immediate stance on the initiative: “I let my staff make the decision. And my staff decided it wasn’t in the best interests of themselves, so we decided to go against Initiative 77.”

Silverman has said she expects Reeder will “rubber stamp,” positions held by Bowser.

“I totally disagree with that,” said Reeder. “The mayor and I both talked abut that prior to the endorsement. We were very clear there are going to be instances where we disagree, but we will do what’s best in the interests of the residents of the District of Columbia.”

Also on the ballot are Republican Ralph Chittams, who wants to lower taxes, and Statehood Green candidate David Schwartzman, who would raise taxes on those earning more than 200-thousand to help pay for unmet needs in DC. Independent Rustin Lewis says he’ll work to make it easier for teachers, first responders, non-profit and government employees to live and work in the District. 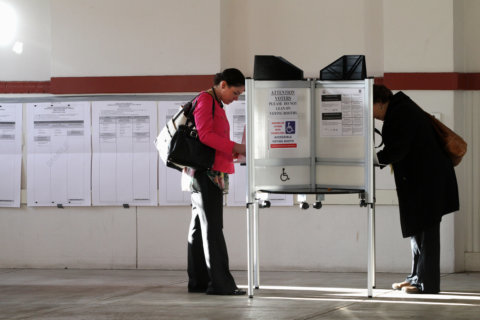