GAITHERSBURG, Md. — The waiting continues for a number of Maryland candidates who ran in the June 26 primary.

The Montgomery County Board of Elections canvassers sat down Thursday to tackle the tally for 3,629 provisional ballots. Of those, 2,450 were Democratic, 300 were Republican and 800 listed as “other.”

The remaining absentee ballots will be counted Friday by the bipartisan teams of canvassers. Those ballots received by 10 a.m. will be collected, and if postmarked by the deadline, they will be counted.

As of Thursday afternoon, Montgomery County Board of Elections spokeswoman Marjorie Roher said 3,700 absentee ballots remain to be counted, but again, that number could grow depending on how many arrive by the 10 a.m. deadline.

Montgomery County Council member Marc Elrich had a 149 lead over businessman David Blair before the completion of the provisional ballot count on Thursday.

As of Saturday morning, Elrich’s lead over Blair had increased to 176 votes. Neither campaign commented on the primary outcome, preferring to wait until the election results are certified by July 16.

When the latest round of provisional and absentee ballots were done being counted on Saturday night, Elrich’s lead had decreased to 86 votes – only 0.07 of a percent of the total votes.

“We had six talented candidates, all with experience and a vision for Montgomery County’s future. So much is at stake that it really matters who wins,” said Maryland state Sen. Cheryl Kagan.

She sat in as an observer while the canvassers tallied the provisional ballots Thursday.

A recount could be requested by candidates, but depending on a number of factors, the campaign of the petitioner could have to foot the bill.

There are a few cases in which a candidate asking for a recount would be relieved of the cost: if the results of the recount flip the results and change the outcome of the race; if the petitioner sees an increase of 2 percent or more of the total votes cast; or if there’s a less than 0.1 percent difference of the total votes cast for the candidates.

There are other tight races, including for Baltimore County executive where Maryland state Sen. James Brochin and former Del. Johnny Olszewski, both Democrats, are neck-and-neck for the seat vacated by the late Kevin Kamenetz. 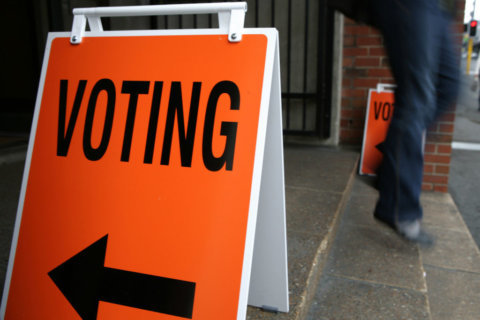