A local business is 'baking a difference' in the lives of veterans and their families.
Listen now to WTOP News WTOP.com | Alexa | Google Home | WTOP App | 103.5 FM
(1/4) 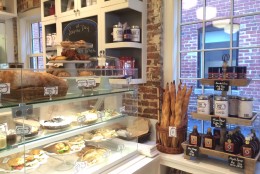 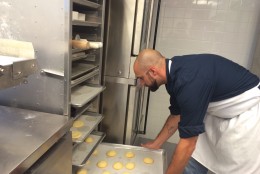 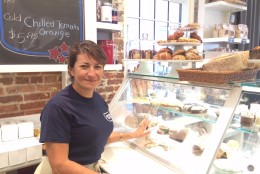 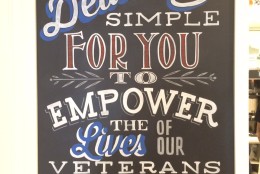 WASHINGTON — Ximena Rozo is a talented industrial and textile designer with a master’s degree from New York’s Pratt Institute and work experience with Boeing. But she finds it difficult to keep a job.

Rozo is a military wife, and every few years — if not every few months — she and her husband are on the move.

“So it is very challenging to keep your career and continue being successful and being able to bring two salaries to the family — it’s almost impossible,” says Rozo, who has lived in the D.C. area for about one year.

She decided starting her own business, one that could move with her, was the only solution. Rozo got right to work designing a line of furniture and home accessories, but ran into an obstacle in the process.

“I consider myself a good designer, but I didn’t have the skills and the knowledge to know how to manage a business, to establish a business plan,” she says.

A small bakery in Georgetown, however, offered to help.

The display cases at Dog Tag Bakery are filled with freshly baked breads, pastries, pies and sandwiches. Around breakfast and lunch time, locals and tourists file into the cafe on the canal and pack the tables in the first-floor dining room.

One floor up, the tables are filled just the same, but laptops and notebooks replace coffee cups and cookies. This is because Dog Tag Bakery is more than a bakery. In partnership with Georgetown University, it’s a work-study program that’s designed to help disabled veterans and their spouses or caregivers re-enter the workforce or refocus their careers.

Fellows who participate in the five-month-long program take courses in topics such as principles of management, marketing, accounting and business policy, while gaining real-life business experience in the cafe, baking and bussing tables.

It’s through kneading dough that Rozo says she has learned the best ways make dough from her furniture.

When her hands aren’t covered in flour, they’re busy mapping out financial projections for her future design business. In the last few months, she’s learned how to source materials and where to manufacture her products to reduce costs, as well as the best channels for sales and distribution.

“I can bake bread, but at the same time, I can apply the same knowledge to price my products and to bring them to the market,” says Rozo, who graduates from the program in October.

By November, she hopes to put it all into action and start her business.

Not everyone enters Dog Tag with the plan to start a business. The program, which was launched in the summer of 2014 by founders Father Rick Curry and Constance Milstein, has graduated one class of fellows thus far. Ogilvie says some of those graduates have gone on to work for major corporations or have been accepted to graduate programs, while others are still in the process of trying to figure out what they want to do.

“The goal is for you to be able to use it as a launchpad for your next step. It’s empowerment,” Ogilvie says.

John Lira is another Dog Tag fellow, and unlike Rozo, he has no plans to start his own business. Ever since the San Antonio native returned home from his second tour in Iraq, he’s collected three academic degrees on a career path in public service, specifically in veterans services.

Lira says he was drawn to the Dog Tag program because he wanted to learn more about the field. What he discovered, however, is a “holistic approach” unlike anything he’s ever experienced.

“[It’s] a little bit of soul-searching to find out who we are, what our true interests are, what passions drive us, and that’s something you won’t necessarily get through a regular academic program,” says Lira, who joined the Marine Corps right out of high school.

Lira starts his kitchen rotation soon, and he hopes baking is one of those undiscovered passions — for the sake of his classmates and the customers, he says jokingly.

“I had no experience baking before I came here,” he says. But he’s up for the challenge. “I love working with the chefs. I was in the Marines — I love getting my hands dirty, I love being part of a team and contributing.”

In the kitchen is where Ogilvie says military ranks get checked at the door.

“It’s an even playing field,” she says. “[Former fellow] Cedric Banks was … a Sgt. Maj. of the Army. He commanded 4,000 soldiers and he’s in there making a bundt cake.”

In the kitchen is also where Dog Tag fellow Sham Hasan hopes to learn the most. Hasan, who is from Baghdad, served as a U.S. Army linguist and provided both oral and written linguistic services to the U.S. in Iraq.

When he and his family were threatened, Hasan says he had no choice but to leave his native country. Last year, he came to the U.S. on a special visa and settled in the D.C. area at the encouragement of his former Army sergeant.

His first job was helping Dog Tag Bakery open its doors last December. And after watching the first group of fellows go through the program, Hasan knew it was something he wanted to complete as well.

“Within three months, I realized I am an entrepreneur,” Hasan says.

His business idea involves something he brought from Iraq to the U.S.: his family’s secret recipe for hummus.

“It’s a great product, people love it,” he says.

And while Hasan may not launch his hummus business right after October’s graduation, he says he now has the skills and knowledge he needs to do it, no matter the timing.

“Being in the program is very motivating; I feel like I can do everything,” he says.

After the current fellows graduate in October, its administrators will focus on recruiting the next class. Fellows apply via an online application, and Ogilvie says more than academic accomplishments, the program looks for applicants who have “the yearning for learning.”

Dog Tag is a local bakery, and because of that, Ogilvie says the program currently focuses its recruiting efforts on veterans in the D.C. area. But in order to help more veterans and to meet demand from consumers who are hungry for sweets and a satisfying mission, Ogilvie says the objective is to build a replicable model that can be instituted in other cities across the country.

“That is the goal, is to … you know, have Dog Tags in San Antonio or Seattle or California,” she says.

For now, the Georgetown store will carry on. 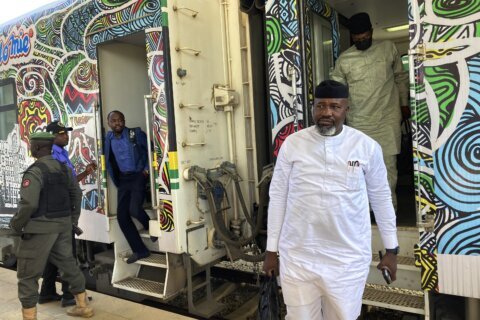 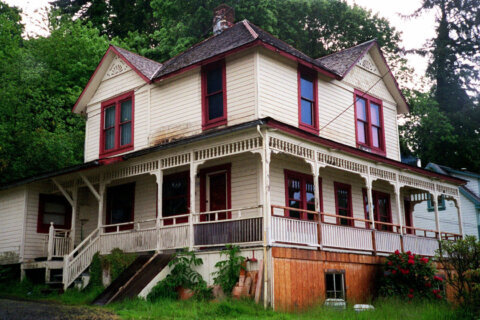