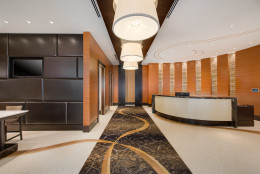 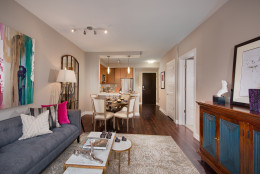 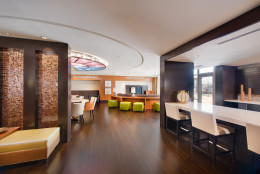 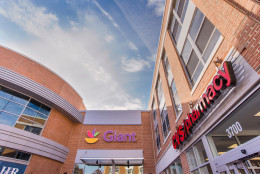 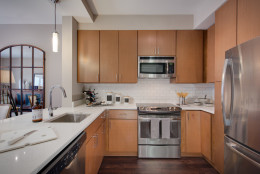 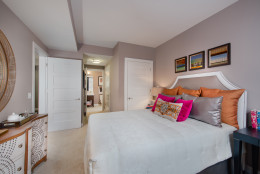 WASHINGTON — In Manhattan, a one-bedroom apartment in a LEED Gold-certified building that overlooks the Hudson River in New York’s trendy Tribeca/Battery Park neighborhood costs around $4,600 a month. A few of the building’s amenities include a pool, a fitness center and a children’s playroom.

Residents in San Francisco can rent a one-bedroom on the city’s central Market Street in a development that boasts a 7,000 square-foot fitness center, two spa rooms and a direct tasting bus to Napa Valley for about $4,500 a month.

Now, D.C. is jumping on the luxury apartment bandwagon.

“It’s certainly at the high end of the District’s rental market,” says Jeffrey Kayce, vice president of The Bozzuto Group, the company that manages the new mixed-use development at Wisconsin Avenue and Newark Street, just north of the Washington National Cathedral.

“But we’re comparable to other new product that’s out there with similar mixed-used communities with so many great amenities,” adds Juliana Thomas, general manager of the new development.

In the last several years, D.C. has seen a boom in new apartment construction to accommodate the city’s growing population. (Since 2005, the District has added almost 77,000 residents, Greater Greater Washington reports.) According to The Washington Post, 1,721 apartments were recently completed or are under construction in Tysons Corner. In NoMa, that number is 1,820 units, and around Nationals Park, 2,242 units are now available or will be soon.

Many of these new rentals are marketed as luxury units. Amenities range from a 24-hour concierge to pools and fitness facilities, to creative spaces (Archstone First and M has a soundproof rooms for aspiring DJs) to a communal lobby dog.

Will Rich, senior vice president and multifamily practice director for the commercial real estate firm Delta Associates, refers to these new luxury rental units as Class A apartments. In D.C., the average price for a one-bedroom Class A apartment is $2,000 per month, Rich says. For a two-bedroom, the monthly rent average is $3,000.

Despite the boom in new luxury apartments, the city has only recently seen a rise in the number of high-end luxury rental residences – and these addresses come with a high price tag.

“It seems as though almost every building that’s constructed now is considering itself to be luxury, but there is quite a difference between an $8,000 rent and what you would typically find in the District of Columbia,” Rich says.

Apartments at The Woodley in Northwest D.C.’s Woodley Park neighborhood are priced up to $12,000 a month. Of course a lease comes with amenities such as a pet spa, an infinity pool and a landscaped rooftop terrace.  The Washington Business Journal reports that the building is meant to appeal to foreign diplomats and other transients with a sizeable income.

At The Apartments at CityCenter in downtown D.C., a two-bedroom, two-bath apartment rents for $6,910 a month. An outdoor pool, a rooftop dog park and access to high-end restaurants and retail — such as David Chang’s Momofuku, Dior and Hermes — are the main draw to the new development.

Bozzuto’s Kayce says the high-end luxury units at Cathedral Commons cater to a mature crowd of residents who want to live in the city and have access to urban conveniences, but at the same time feel removed from the everyday rush. (Both the Tenley Town Metro station and the Cleveland Park Metro station – the two closest to the development – are 1.1 miles from Cathedral Commons.)

“You’re not in the hustle and bustle of D.C., but you’ve still got all of the conveniences here,” Kayce says.

“It’s very green. It’s in the city, it has the amenities … and great access up and down Wisconsin, beautiful views of the Cathedral, and yet, it’s not the middle of the city. It’s great access in a very secluded sort of area, which is what defines Cleveland Park and Cathedral Heights.”

However, with prices ranging from $2,300 for a studio and up to $9,500 for a townhome, the question remains: Will the new development will be able to fill its units?

Eight months after The Woodley opened to residents, only 30 percent of the 212 units were filled, Washingtonian reports. Even the area’s Class A apartments are having trouble attracting and retaining residents lately, The Washington Post reports. The article says some building owners are “aggressively discounting” rent by 10 percent or more a month. Some are even offering one to two months of free rent to attract lessees.

But Kayce says some of the bigger (and more expensive) loft units and townhomes at Cathedral Commons have been the most in-demand units among new residents.

“Sometimes when you’ve got a mix that skews up toward that size and that price point, you get a little more nervous about those, but it’s been some of the most popular,” he says.

The design for Cathedral Commons, which has a total of 145 units, draws on inspiration from boutique hotels, Kayce explains.

“Several years ago, we started to realize that the apartment world was starting to chase its own tail and look very similar, so we started spending a lot of time looking at the great boutique hotels of the world and museums and restaurants.”

The walls hold art curated from local galleries, kitchen backsplashes are made of beveled subway tile from a local supplier and bathroom vanities are modeled after a high-end hotel in Napa. There’s even attention to detail in the hallway’s arches and in the walls by the elevator, which are covered in marble.

Courtyards and grilling areas offer green space. However, unlike many luxury apartments, there is no pool at Cathedral Commons.

The retail planned for the area includes a second D.C. location for the always-packed Barcelona Wine Bar, as well as Grilled Oyster Company, Pure Barre and Solidcore. Giant Food, CVS, Starbucks Suntrust and Wells Fargo make up some of the everyday retail.

If residents can afford a near $10,000 a month in rent, why aren’t they buying? Delta Associates’ Rich says in D.C., there will always be a market for those who want to rent – regardless of the price tag.

“There’s a significant amount of people in the District who rent by choice, whether it’s because of the career that they have – they’re in town for a couple of years and don’t want to purchase a home that they’re only going to live in for two years. There are people who live in the city during the week and then go back home to their ex-urban home for the weekend. And there are just people who don’t want to buy,” he says.

Additionally, Rich explains that there is currently a tight supply of condos and houses on the market, especially in upper Northwest, which is where Cathedral Commons is located.

Rich says as the city continues to grow, residents can expect to see more high-end luxury rental buildings, as well as apartments at lower price points.

“You’re going to see apartment buildings of different stripes. You’ll see some luxury buildings – not just in the District, but outside of the District, perhaps in Bethesda or Tysons Corner or other parts of the Metro area,” he says.

“You’ll also see small units being built to cater to the millennial generation who can’t afford $8,000 rents or $3,000 rents.”