Shattering of hotel glass door in Vegas mistaken for gunfire

LAS VEGAS (AP) — The loud shattering of a glass door at a Las Vegas Strip hotel apparently was mistaken for gunfire, causing panic inside and a social media frenzy about a possible active shooter.

Las Vegas Metropolitan Police said they responded to calls of possible gunfire around 10:45 p.m. Saturday and found a glass door shattered in the valet area of the MGM Grand.

“It caused a loud bang, there was a subsequent panic, thinking it was possible gunfire given the nature of what’s been happening across the nation,” Metro Police Capt. Branden Clarkson said Sunday.

Video posted to social media showed people scrambling across the Strip, including one video that showed officers moving with guns drawn and lowered near New York-New York as several people hurried in the opposite direction.

Clarkson said there was no evidence of gunfire in the area and the event was under investigation.

He also said one unidentified person has been detained and faces a misdemeanor charge of destruction of property.

Clarkson said one person had minor injuries after falling down during the panic, but nobody was transported to a hospital. 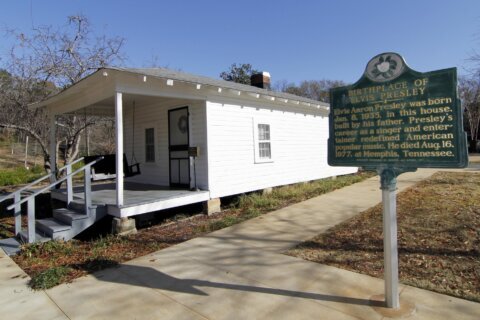