It's one thing to flip a pancake; it's another to perform a flip while cooking a pancake. An emerging genre of theater blends Cirque du Soleil-style acrobatics with cooking.
Listen now to WTOP News WTOP.com | Alexa | Google Home | WTOP App | 103.5 FM
(1/7) 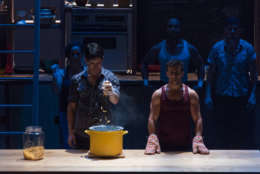 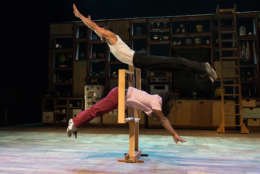 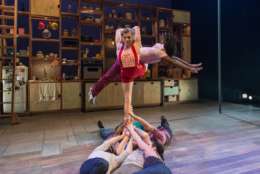 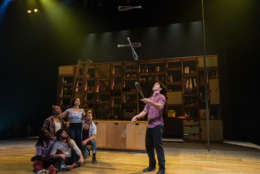 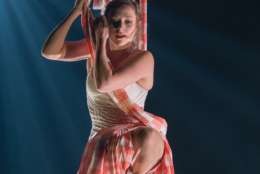 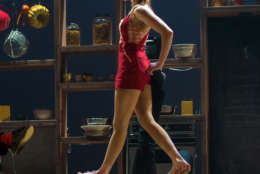 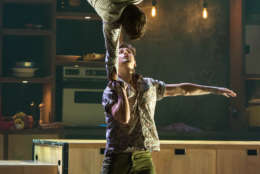 WASHINGTON — If there’s one thing that sets “Cuisine & Confessions” apart from other acrobatics shows on the theater circuit, it’s the banana bread that bakes on stage throughout the performance.

There’s also the omelet the cast whips up while twirling through the air — and the aromatic rosemary pasta.

“The goal was to really engage all the senses,” said Shana Carroll, co-director, choreographer and writer of “Cuisine & Confessions,” a production from Montreal’s The 7 Fingers of the Hand that marries the performing arts with the culinary.

Carroll and her husband, Sébastien Soldevila, came up with the idea for the food-fueled show almost three years ago. The concept stemmed from their mutual passion for cooking and family memories collected around the table. The show’s storyline weaves together anecdotes from the performers and their personal histories with food.

“We all have food-related memories, so there’s an autobiographical element to the show,” said Carroll, whose “Cuisine & Confessions” lands at George Mason University’s Center for the Arts April 8-9. “So we learn a lot about the performers on stage and we connect to their various memories, as it reminds us of our own memories of childhood and ancestors and food.”

The food that’s thrown together throughout the show is real — and according to Carroll, it’s quite delicious. A few minutes before it starts, audience members are invited to help prep ingredients that will be used on stage.

When the lights dim, things get tricky. Cooking in its own right can be challenging. Cooking to choreography is a whole other skill set.

“During the omelet number, we’re doing a whole kind of elaborate juggling of choreography while actually making an omelet,” said Carroll, who adds that similar numbers take place when the cast creates the banana bread and the pasta dish.

“So there’s a lot of acrobatics where cooking is involved. There are even choreographies where people are eating.”

A chef collaborated with the cast and crew to refine the recipes used on stage and to teach basic knife skills, so as to avoid any chopping-related injuries during the live performance. When the meal is complete, audience members are invited to taste the culinary creations.

“Cuisine & Confessions” is not the only show that blends cooking and theater. In 2016, Food Network favorite Alton Brown brought edible entertainment to Broadway with “Alton Brown Live: Eat Your Science.” Other productions around the country mimic a similar experience.

“I can’t tell if it’s a fad or if it’s something that’s always been there that hasn’t been as in the forefront,” Carroll said about the emergence of food-themed theater.

Regardless, the combination of stunts and spatulas creates an appetizing adventure.

George Mason University’s Center for the Arts will host a mini outdoor festival on Saturday, April 8, from 4 to 8 p.m., complete with food trucks, demonstrations and a “confessions” booth.