Promoting play: The importance of a spontaneous summer

With schedules bursting with school work, after school activities and summer camps, few kids leave time for spontaneous play. But a local woman is out to change that. Plus, tips for summer play.
Listen now to WTOP News WTOP.com | Alexa | Google Home | WTOP App | 103.5 FM
(1/5) 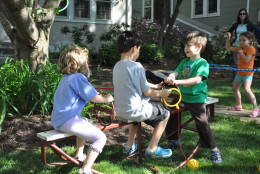 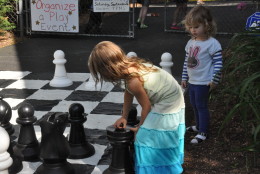 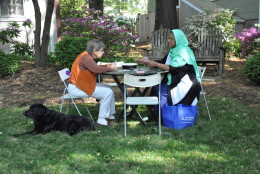 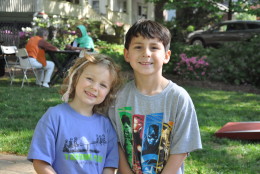 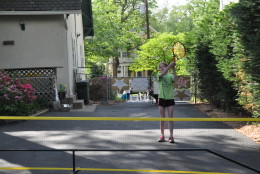 WASHINGTON — It’s not uncommon for Pat Rumbaugh’s front yard to look like it’s ready to host a small carnival or birthday bash at a moment’s notice.

The Takoma Park, Maryland, resident frequently sets out a life-size chess board, corn hole and mini tennis. Hula hoops, jump ropes and sidewalk chalk are also strewed across the lawn.

“Play is really for everyone. And just imagine, in society, if everybody gave time to play,” says Rumbaugh, a former physical education teacher.

“It relieves stress; it relieves boredom … There’s a lot of learning that takes place when you play.”

Throughout the Takoma Park community, Rumbaugh is known as The Play Lady. In 2009, she stared Takoma Plays, a community-based group dedicated to promoting play. Last July, she took that mission national when she launched Let’s Play America! She’s also written the book “Let’s Play at the Playground” and has delivered two TEDx talks on the subject.

But one of Rumbaugh’s favorite things to do is host spontaneous play days.

“It really makes me sad — the decline in free outdoor play,” says Rumbaugh, who has organized more than 50 neighborhood play events. “When you have free play, you create things. Because it’s not adult-led, it’s spontaneous, it’s innovative; you see kids playing with kids of different ages.”

Takoma Park resident Janee Weeda says seeing her 4-year-old and 2-year-old play with both older and younger kids is one reason she loves Rumbaugh’s play events.

“It’s a chance to meet other kids. My daughter starts Kindergarten in the fall so she meets people who will go to her school. And it also gives them an opportunity to try new activities that they normally wouldn’t try,” she says.

About 20 kids showed up to Rumbaugh’s most recent spontaneous play event, but it wasn’t exclusive to kids.

Under the shade of a big tree, 88-year-old Colleen DiPaul and 66-year-old Trunesh Teklegiorgis were in the middle of a heated card game, when a small child came up to their table and challenged Teklegiorgis to a game of corn hole.

“Go Tru!” DiPaul called out, cheering on her friend.

DiPaul has been coming to Rumbaugh’s play events from the beginning. “We’ve met so many interesting neighbors because everybody’s invited,” she says.

And she plans to keep attending the events, saying her age doesn’t deter her.

“[Play] is just natural because I never grew up,” she says, laughing.

Rumbaugh’s detached garage is stocked from floor to ceiling with bins of play equipment. Some pieces have been donated; others were purchased using grant money.

But Rumbaugh stresses that equipment isn’t always necessary for play. And a few kids in her backyard prove that point. Their shouts of “Ready or not, here I come!” kick off a game of hide-and-seek.

“It doesn’t matter what you make or do, it’s what you feel like doing,” Rumbaugh says.

With summer just around the corner, Rumbaugh has a few tips for parents and caregivers who want to elevate their child’s playtime. Her best piece of advice is to start filling a box with a few basic items, including a ball, a pack of cards, a puzzle and a few clothing items for dress up.

If your children are little, Rumbaugh says to trace their bodies using the sidewalk chalk and have them fill in where their eyes should go, where their mouth should go, etc. Older kids can play hopscotch and tic-tac-toe with the chalk.

“Or you could just be creative and say, ‘Let’s draw a picture,’” she says. “And the best part about it is the next hard rain, it’s all gone.”

“Look in your own backyard and see what you can do,” Rumbaugh says.

But ultimately, the best thing parents can do when it comes to play is to bring out their own inner child.

“We’re really trying to make an impact. … Everybody deserves to play.”