It’s the best concert you'll never see. Cut from the cloth of Woodstock, but instead of hosting hundreds of thousands in a public setting, these performances are shrouded in mystery.
Listen now to WTOP News WTOP.com | Alexa | Google Home | WTOP App | 103.5 FM
download audio
'A secretive organization. A secretive charity.' (WTOP's J.J. Green)

WASHINGTON — It’s the best concert you’ll never see. It’s called “Spookstock”: cut from the cloth of Woodstock, but instead of hosting hundreds of thousands in a public setting, this performance is shrouded in mystery.

Spookstock is a product of “a secretive charity,” said Mark Kelton, one of its board members. Kelton, a retired CIA officer who worked in the enigmatic National Clandestine Service, deeply believes in the project.

“Having known a number of people killed in the line of duty, it’s always a brutal thing. The biggest concern one would suppose they would have is what’s going to happen to their family,” Kelton said.

The Spookstock Foundation, which has conducted concerts since 2012, attracts big name performers but provides no publicity about the events. The public is not invited; the location and date are secret.

Attendees — beneficiaries, family and friends of the fallen, and a limited number of representatives from corporate backers — must be invited to enter.

Proceeds from the event are donated to the CIA Officers Memorial Foundation, which supports the well-being and educational needs of children and spouses of all fallen CIA officers, and the Special Operations Warrior Foundation, which offers full scholarship grants as well as educational and family counseling to the surviving children of Army, Navy, Air Force, and Marine Corps special operations personnel who lose their lives in the line of duty.

While the events are designed to be enjoyable, the strands of secrecy and seriousness that run through the planning are evident during the event. In fact, according to the director of Spookstock, who requested anonymity, there is a strict rule: no sponsor preening.

“No one, including sponsors, is allowed to touch the microphone unless they are a performer or a beneficiary,” the director said.

The families are the focus of the event — and they make it clear just how grateful they are.

“Children, some of them, come and they actually talk about mom or their father and what the foundations that have supported them have meant to them and their lives,” Kelton said.

Those who want to contribute can make donations to the CIA Officers Memorial Foundation and the Special Operations Warrior Foundation. 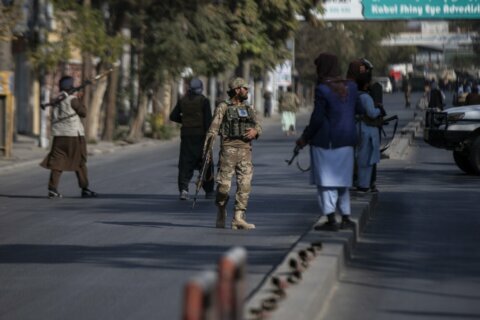