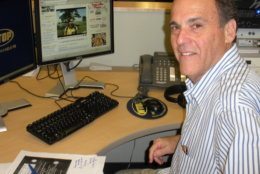 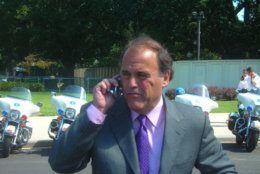 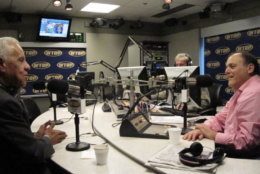 Plotkin was a staple on WTOP for 10 years. He hosted “The Politics Program with Mark Plotkin” on Fridays, through which he delivered his colorful commentaries on air.

He came to WTOP in 2002 and left in 2012. Before that, he was at WAMU, did commentary for Fox5 and he would write columns for various publications.

In the WTOP newsroom, he was often heard on the phone questioning elected officials and dashing into the studio for his live interviews.

Tributes from D.C. area politicians and journalists started pouring in upon the news of Plotkin’s death.

WTOP’s former Vice President of Programming Jim Farley described Plotkin as “one of the feistiest guys I had ever met.”

“He was a bulldog when he got on a story or on an issue … He was rough on everybody because he wanted to get things done,” Farley told WTOP. “He was a character. He had some rough edges, but was so memorable.”

Farley said he hired Plotkin at a time when WTOP had a presence in the D.C. area suburbs, but not so much in the District. That changed within weeks when Plotkin came on board.

“I am saddened to hear of the passing of Mark Plotkin. Mark embodied D.C. politics, cared deeply about this city …,” Bowser said in a statement Sunday. “Minted in a time before social media, Mark was never one to mince words and offered fair, poignant perspectives across media outlets. In particular, tuning into Mark’s show was must-listen radio.”

It is with a heavy heart that I must tell you that longtime to DC voting rights advocate and political analyst Mark Plotkin has passed away. Mark was one of my oldest friends and a steadfast advocate for his adopted hometown of Washington DC. He will be missed. pic.twitter.com/y3A0jvUY14

“I’m deeply saddened to let everybody know that my close dear friend Mark Plotkin and someone who was really revered by everyone has passed away today,” Evans told WTOP. “He was a champion for D.C. statehood. It’s somewhat interesting that right after the hearing this past week that Mark had passed away. We will miss him deeply.”

NBC Washington’s Mark Segraves said he learned “so much” from Plotkin from the 10 years he shared an office with him.

“He taught me not only how to hold public officials accountable, but [also] how to listen to a person’s answers and follow up,” Segraves said. “While Plotkin wasn’t born and raised here in D.C., he considered Washington his adopted hometown and loved it with all of his might.”

Im heartbroken to report that my longtime friend and former colleague Mark Plotkin has passed away at his home in DC. Mark showed me how to hold elected officials accountable. He was one of a kind and loved Washington DC. R-I-P Mark, we’ll take it from here. pic.twitter.com/jLVBjCaSey

Watch Plotkin in action interviewing then-senator and presidential candidate Barack Obama about issues that impact residents in the D.C. area.