Get to know Kamala Harris’s family

Kamala Harris, Joe Biden’s history-making vice presidential pick in the 2020 election, comes from a family of immigrants whose roots and political views shaped her. Harris, who served four years as a U.S. senator from California, is being sworn in today as the first Black woman vice president in U.S. history as well as the first of South Asian American heritage.

Here’s what we know about Kamala Harris’s family.

Her parents were civil rights activists

Harris grew up in a household with a Jamaican father and Indian mother. Her mother, Shyamala Gopalan, emigrated from India in 1960 to attend the University of California, Berkeley and pursue a doctorate in endocrinology. Her father, Donald Harris, emigrated from Jamaica in 1961 to also attend Berkeley. Both of her parents were actively involved in the Civil Rights Movement.

“It’s because of them and the folks who also took to the streets to fight for justice that I am where I am. They laid the path for me, as only the second Black woman ever elected to the United States Senate,” Harris proudly shared on Instagram in June.

Her parents divorced when Harris was 7 years old. Harris wrote in her memoir, “The Truths We Hold” that “they didn’t fight about money. The only thing they fought about was who got the books.” Though her father remained a part of their lives, Harris and her sister lived with their mother who she said: “was the one most responsible for shaping us into the women we would become.”

Her father, Donald Harris, was a professor at Stanford University where he taught economics classes. According to his bio on Stanford’s website, his career took him across the globe and he has served as an economic consultant to the Government of Jamaica. He retired from Stanford in 1998.

While the vice presidential nominee does not speak much about her father, she often mentions her mother, an accomplished breast cancer scientist who died from colon cancer in 2009. “I’m the daughter of a mother who broke down all kinds of barriers. Shyamala Harris was no more than five feet tall, but if you ever met her you would think she was seven feet tall. She had such spirit and tenacity and I’m thankful every day to have been raised by her,” she wrote on Instagram in May.

Following the announcement that she would be Mr. Biden’s pick, Harris paid tribute to her mother on social media, saying, “I dearly wish she were here with us this week.”

She is close to her relatives in India

Harris’s mother often took her to India to visit their family there. “When I was a young girl visiting my grandparents in India, I’d join my grandfather and his buddies on their morning walk along the beach as they would talk about the importance of fighting for democracy and civil rights,” she wrote on Instagram.

“I come from a family of fighters,” she said at the New Hampshire Democratic Party convention in 2019.

“Our family feels happy and I feel happy that my sister, Shyamla, her mother, would have been very happy and proud of her daughter,” Balachandran said from his home in New Delhi. “It’s a historic day in a number of ways for the Indian community for the first time getting into a high political position.”

Her sister is a close political advisor

Maya Harris, Kamala’s younger sister, is “incredibly proud” of her sister’s achievements. The 53-year-old has been at Harris’s side throughout her political journey.

She was the campaign chairwoman for Harris’s presidential bid and the two are very close.

“I think most people who know Maya will tell you she’s one of the smartest people they know,” Kamala said in an interview with Politico. “The fact that she has volunteered to work on this campaign at such a high level, and she’s exactly who she’s always been — she works around the clock and she’s probably the hardest, if not one of the hardest working people on the campaign — I feel very blessed.”

After Mr. Biden’s announcement, Harris’s younger sister echoed the role their mother has played in their lives. “You can’t know who Kamala Harris is without knowing who our mother was,” she tweeted.

Maya announced in 2020 that she has been battling lupus for the past three decades. She has a daughter, Meena, who often shares photos of her aunt Kamala, and two grandchildren. Maya and Meena Harris, along with Kamala’s stepdaughter Ella Emhoff, took center stage at the the Democratic National Convention to introduce Kamala Harris to the nation.

Her husband is an attorney and she is a step-mother

Harris met Douglas Emhoff on a blind date set up by one of her friends, and they got married in 2014 at the Santa Barbara Courthouse. The 56-year-old Emhoff is an entertainment lawyer and worked as a partner at the DLA Piper law firm representing clients in “complex business, real estate and intellectual property litigation disputes,” according to his company bio. He plans to teach at Georgetown University Law School while Harris serves as vice president.

Emhoff has been supportive of his wife throughout her political career and bid for the White House.

After Harris announced she would be ending her own presidential campaign, Emhoff shared a picture with the caption, “I’ve got you. As always.”

Emhoff will be the nation’s first second gentleman, which Mr. Biden mentioned during his first appearance with his newly chosen running mate in August 2020. “Doug, you’re going to have to learn what it means to be a barrier-breaker yourself in this job you’re about to take on,” Biden said during his speech in Delaware.

Emhoff, who was born in Brooklyn, has two children, Cole and Ella — named after jazz legends John Coltrane and Ella Fitzgerald — from a previous marriage to Kerstin Emhoff, whom Harris calls a “dear friend.” The children refer to Harris as “Momala,” and Harris said they are her “endless source of love and pure joy.”

“They are brilliant, talented, funny kids who have grown to be remarkable adults,” Harris said in an interview with Elle Magazine. “I was already hooked on Doug, but I believe it was Cole and Ella who reeled me in.”

Cole is a graduate of Colorado College, and according to his LinkedIn profile, he is an executive assistant at Plan B Entertainment. His sister, Ella, is a student at Parsons School of Design and she is an avid knitter, according to her Instagram account. 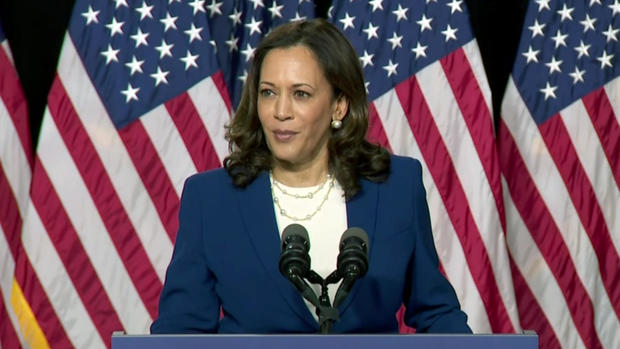