The Biden Inaugural Committee has announced participants in the virtual “Parade Across America” for Inauguration Day. Two D.C.-area groups have been picked to take part in the parade, including the Tragedy Assistance Program For Survivors, or TAPS, in Arlington, Virginia.

“We’re so proud to be included once again in the inaugural activities, including the inaugural parade,” said TAPS founder and President Bonnie Carroll.

The organization is nonpartisan and serves as a safe space for grieving military families. And it isn’t the first time TAPS has participated in an inaugural parade; it has done so for every inaugural over the past 30 years.

“We welcome our new commander-in-chief, we stand with our military, and we remember all those who have served and died for this flag that we pay tribute to,” Carroll said.

Because of the pandemic, the group won’t march down Pennsylvania Avenue. Instead, it has recorded a video that will be played during the virtual parade.

Taking part in the video is the family of Navy Capt. David. S. Wilson of D.C., who died of a heart attack in 2014. Wilson’s widow, Sara Wilson, said she is honored to represent an organization that has helped her and her family through the difficult time that followed her husband’s death.

Sara Wilson said she is also moved that President-elect Joe Biden and his inauguration team decided to honor the families of fallen service members.

She and her two children, 13-year-old Christina and 9-year-old Kate, will appear in the video.

“It felt very shocking, but like, very exciting,” Kate Wilson said, recalling her reaction to the news that she would be featured in the video.

Sara Wilson said she and her family will be watching for their appearance from home, and may share a toast with neighbors when it comes on.

Also chosen to participate and kick off the parade from the D.C. area is the Howard University Drumline. The HBCU is the alma mater of Vice President-elect Kamala Harris.

The Howard musicians and the drumline from the University of Delaware, which is Biden’s alma mater, will be a part of the Presidential Escort in D.C.

The Presidential Escort will happen after Biden and Harris visit Arlington National Cemetery. Every branch of the military is also expected to be represented in the escort, including the U.S. Army Band, a Joint Service Honor Guard, and the Commander-in-Chief’s Guard and Fife and Drum Corps from the 3rd U.S. Infantry, also known as “The Old Guard.”

The Biden Inauguration Committee said the parade will include performances representing all 56 U.S. states and territories, and will be hosted by actor and director Tony Goldwyn. Jon Stewart, New Radicals and Andra Day are also expected to take part. See a full list here.

Prosecutors use emails to build case against key Trump ally 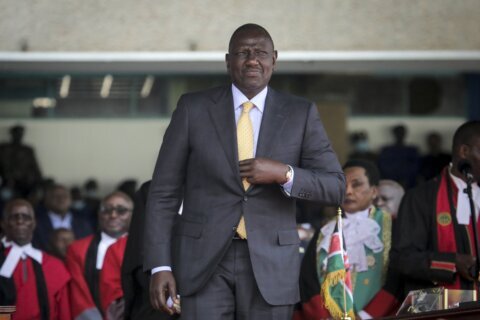