Former Presidents Bill Clinton, George W. Bush and Barack Obama are expected to attend the inauguration of President-elect Joe Biden on Wednesday, although his immediate predecessor is expected to leave the White House ahead of the day’s ceremonies. Along with President Trump, former President Jimmy Carter, who at 96 is the oldest living president, will not be attending the inauguration.

Despite Mr. Trump’s absence, Vice President Mike Pence is expected to attend the inauguration ceremony. Pence will not be appearing at Mr. Trump’s farewell event at Joint Base Andrews before the president departs for Florida on Wednesday morning, a senior administration official told CBS News.

Mr. Biden will be sworn in by Supreme Court Chief Justice John Roberts, and Vice President-elect Kamala Harris will be sworn in by Justice Sonia Sotomayor. Several members of Congress are expected to attend the event, although they have only been allowed one guest ticket. In previous years, roughly 200,000 tickets in total would be distributed to members of Congress to distribute to constituents. But because of the coronavirus pandemic, attendance at Mr. Biden’s inauguration is expected to be very limited.

There are also expected to be several celebrity guests in attendance at the inauguration, including Lady Gaga, Jennifer Lopez, Bruce Springsteen and Garth Brooks.

Although attendance will be sparse, there will be tight security at the inauguration, which will occur just two weeks after an unprecedented assault on the Capitol. The Pentagon has authorized more than 25,000 National Guard troops to secure the event, and the FBI is vetting all Guard members. 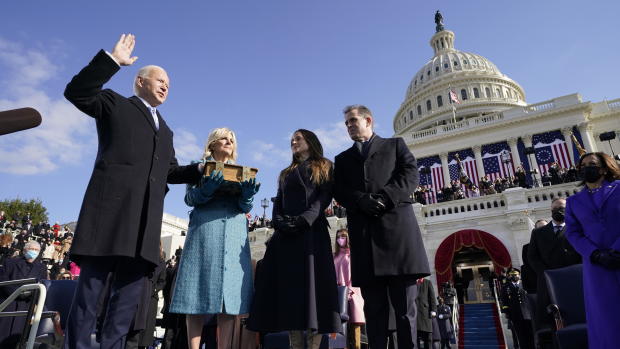 Inauguration 2021: Swearing in of Joe Biden and Kamala Harris

Correction: An earlier version of this story misstated the number of tickets members of Congress were given to distribute to constituents.