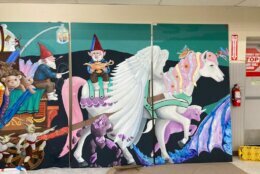 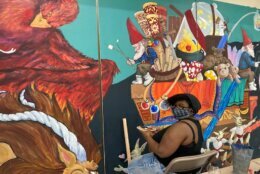 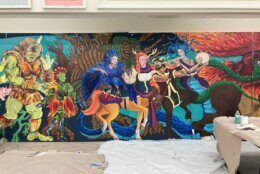 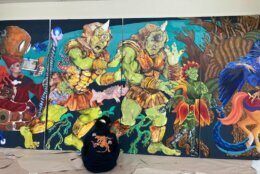 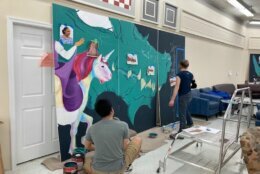 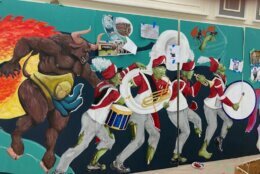 If you didn’t already know, there’s a department store for monsters and mythical creatures in Columbia, Maryland.

This week, the humans working there unveiled a new surprise for visitors – a mural half the length of a football field.

The new art adorns the front of an old Safeway grocery store in the Long Reach Village Center that was turned into an art attraction in September, titled the “DoodleHATCH Department Store for Mythical Creatures, Time Travelers and Galactic Tourists.”

Lee Andersen, founder of ManneqART, the non-profit that supports DoodleHATCH, said she’s excited to see the mural come to life.

“There’s a cyclops who’s missing an eye and there’s a little goblin throughout the mural that’s running away with the eye and another one that’s blowing the raspberry the Cyclops,” Andersen said.

The painting was unveiled during a ceremony on April 1, but it was not an April Fool’s joke.

The Maryland State Arts Council sponsored the mural and provided funding for the boards that the mural was painted on, as well as the paint.

The mural was designed by artist Justin Nepomuceno. It’s his first mural.

“I think having this giant, kind of bold, colorful mural, right against the main road will really kind of show the start of this overall revitalization of this center,” Nepomuceno said.

It took almost 100 artists six months to create the mural using more than 30 gallons of paint on 35 panels measuring 4 feet by 8 feet each. The panels were then mounted side-by-side on the front wall of the old Safeway supermarket.
The design features a parade of marching dragons, ogres, unicorns, trolls and other creatures from fantasy realms all headed to go into DoodleHATCH.
“It’s just so mind boggling to see like, oh my gosh, like all the imagery like lines up, like just seeing the scale is just incredible,” Nepomuceno said.
And it’s not just for those with tickets to visit the inside of DoodleHATCH. Andersen said it’s a good socially-distancing activity since you can view the mural from your car.
She’s hopeful that people will visit and possibly dress up and pose with the mural and share those pictures on social media and with friends and family.
“We do hope, ultimately that is, that these pictures will be shared all over the country, and, we would hope that they would get shared around the world. That’s our greatest ambition,” Andersen said.